Pokémon Past
and
Pokémon Future

Pokémon Past and Pokémon Future are the first games in Generation VIII and are set on the Auzea region. They were announced through a Nintendo Direct on March 1st, 2019, and were released on November 17th, 2019 worldwide. All copies of the game were available in ten languages: English, German, Spanish, French, Italian, Brazilian Portuguese, Korean, Simplified Chinese and Traditional Chinese. The game's plot focuses around traditions vs. progressions, with the side the protagonists sides being different for each game (Traditions for Pokémon Past and progressions for Pokémon Future, and vise versa for the evil teams).

The Poké Scanner allows you to find rare Pokémon normally unobtainable, such as starters, Alolan Pokémon, pseudo-legendary prevos and Legendary Pokémon. You select a route or other area with wild Pokémon, scan it and see if a rare Pokémon is in the area. If it is, it will give you a silhouette and it's location. You can only scan once every 3 real-life hours. It is only obtainable after defeating the Elite Four. The Pokémon that appears depends on the habitat of the scanned region. Pokémon that are already registered in the Pokédex as captured will be less likely to appear than non-captured Pokémon.

A list of Pokémon obtainable via the Poké Scanner is below.

The Poké Ride returns from Generation VII, functioning the same as before, however you can unlock alternate Pokémon for each service. A list is provided below of each Pokémon available for Poké Ride.

Battle Royals return from Generation VII, functioning exactly the same as before.

Unlike many previous main-series titles, none of the newly-introduced Pokémon are version exclusives except the box legendaries. This is so the player can experience all the new Pokémon the region has to offer. 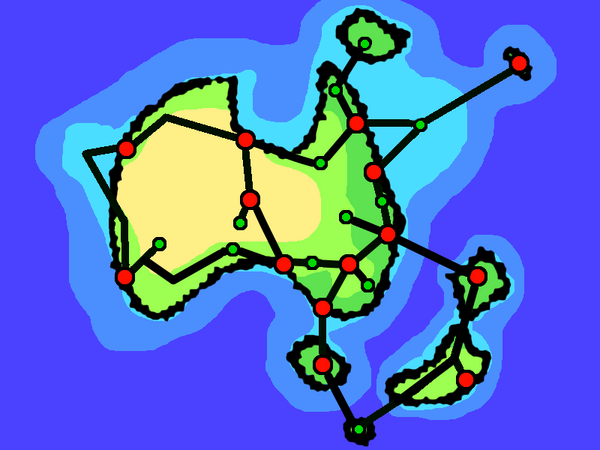 The Auzea region is based loosely off of Australia and New Zealand, and the surrounding area. It has three main biomes; Grassland, Desert, and Coastal. More to be added later

A ^ means it is a hidden ability for that Pokémon.

Retrieved from "https://fantendo.fandom.com/wiki/Pok%C3%A9mon_Past_and_Future_(Goldmelonmaster)?oldid=3087222"
Community content is available under CC-BY-SA unless otherwise noted.