Pokémon Daybreak & Pokémon Twilight are the latest titles in the critically acclaimed Pokémon franchise, also serving as the first instalments in the newest generation of Pokémon, Generation X (ten).

The main driving force behind the games are to create a fresh-feeling experience for the older Pokémon fans, and to give the series the face-lift it has been needing for many generations previous. Many mechanical, graphical, and miscellaneous improvements have been at the forefront of the game's development in order to create this experience.

The game also serves to give more backstory to certain Pokémon, expand on features introduced in previous generations, and tie up any loose ends previous generations may have left, due to this, the game is very story-driven, and there are less new Pokémon introduced into this generation as a result. The overall experience of the Pokémon Journey has also been tailored to feel more realistic, with more references to outside media and other influences in the world being prominent throughout the game.

The titles are set in the beautifully diverse region of Fyeno. The region is one of the biggest the series has ever seen, encompassing elements of many ecosystems and environmental factors, influenced by the Earth as a whole. The game will be distributed in ten languages: English, German, French, Italian, Portuguese, Japanese, Korean, Chinese, Arabic and Russian.

Pokémon Daybreak and Pokémon Twilight are set in the breath-taking Fyeno region. 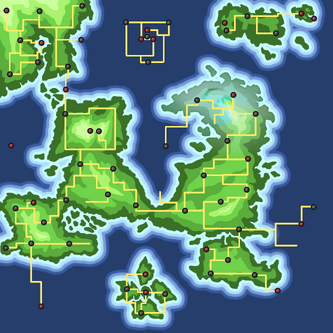 This region is by far the largest to appear in a canonical Pokémon game to date, featuring numerous cities, towns, and places of interest. The region is so vast, with small nooks and crannies to explore, keeping the player entertained for hundreds of hours of gameplay.

Fyeno is also the first region since Unova to implement a seasons feature. This means that all places in the region will be affected by the time of year it is in the player's real world, however on a minimised scale. Each real-world week in a month will feature a different season, the first week of the month will be spring, and et cetera.

Fyeno is also heavily industrialised generally, and as a result, has a lot more influence from media compared to previous generations, in order to create a more immersive and realistic in-game experience for the player. Which means a large majority of cities and connecting routes feature roads, for example.

Pokémon Battling is a lot more well recognised and celebrated in the Fyeno region, similarly to Galar, Pokémon Gym Challenges are very recognised within the media in the region, including constant television and radio coverage. Large crowds emerge at Pokémon Gym arenas to watch the upcoming talent challenge the leaders, making the Pokémon lifestyle feel like a major sport and influence in the region.

The Fyeno Gym Challenge is the name given to the region's Pokémon Gym Championship. In Fyeno, there are eighteen Gym Leaders that the player must defeat in order to progress to the next stage of the challenge, the Elite Five, who are believed to be five of the toughest trainers Fyeno has to offer. All trainers in the past year that have successfully defeated the Elite Five will then advance into the Championship Bracket, where they will fight in a tournament style to decipher who will become the next Fyeno Pokémon Champion.

Pokémon Daybreak and Pokémon Twilight follows a more detailed and in-depth plot compared to the predecessors. In comparison to previous games, where the player fights the champion with around a Level 50-60 Pokémon team, the player will now face the Champion with a full set of Level 100 Pokémon, due to a longer story and a bigger region available to the player. The story of Pokémon Daybreak and Pokémon Twilight is presented through chapters to help add structure to the formula.

All images are placeholders until official character designs are drawn, but the representative characters were chosen as they have similar personalities.

The prologue introduces the player to the Protagonist, who is living at home with their father. At breakfast one morning, he mentions to the player that his siblings will be visiting shortly as summer vacation is about to begin. We then cut to the siblings Rose and Travis in Rose's room at school, who explains to Travis her excitement about finally starting her Pokémon adventure. Travis doesn't seem too interested initially, but after some prodding from Rose, he comes around to the idea. Rose then mentions how she hopes the Protagonist will hopefully be ready to do the same and travel with them.

Rose and Travis return home, and give the shoulder to their father, completely ignoring him in favour of talking to the Protagonist. After an intense conversation, the Protagonist agrees to travel to the Fyeno region with his siblings so that they can "keep an eye on Rose and Travis", but deep down they are so excited to finally start their Pokémon adventure like their siblings.

The first act of the plot focuses on the transition the Protagonist and their siblings face moving to a new region, specially the Wrivine Suburbs in Yleigh City. Rose and Travis initially face harsh criticism from one of their neighbours in Yleigh for their negative and loud personalities, which eventually cultivates in beginning the first rivalry with a trainer called Amelia.

More to be added.

The way Pokémon Daybreak and Pokémon Twilight plays follows that of a typical Pokémon format, however, a majority of areas in the game have been reworked, revamped, or just generally improved to make for a more dynamic and everlasting Pokémon experience.

Replacing the Poketch and similar products from previous generations, the PokeTrainer App is a free-to-use application that Trainers in the world of Pokémon can download for their Smartphones after receiving a letter of approval from the Official League of Pokémon Masters. This app and the Smartphone in general introduce a lot of features for the player, such as:

The Pokémon Typing System has been completely re-evaluated and reworked in an attempt to balance the system, make it more diverse and more detailed. Major adaptations include:

More to be revealed as the game develops.

A larger emphasis has been placed on exploration within Fyeno. Due to the region's size, there are many nooks and crannies that the player will discover and explore while travelling, with many mechanics being added to aid this.

One of the biggest additions to the exploration experience is giving the player character the ability to jump and crouch in the over-world. This allows for a multitude of new exploring opportunities, like crawling through small crevices and jumping over fences to find new items and other in-game events.

The Expedition Kit is a combination of multiple items that the player attains during their journey. These items were introduced as a replacement to HMs, allowing the player to overcome obstacles in their way such as boulders or vines.

Transportation in the Fyeno is diverse and industrialised. Over the course of the player's journey, they will have the opportunity to unlock new transportation methods, through items and services that become accessible to the player, including a story arc in the game's story where the player character can take their driving test.

Soaring in the Sky

The Soaring in the Sky mechanic from Pokémon Omega Ruby and Pokémon Alpha Sapphire returns in Pokémon Daybreak and Pokémon Twilight, but as a more generalised mechanic instead of locked to the post-game or through Mega Latios/Latias.

When the player has acquired the correct expedition tool which allows them to fly around the region, and has a Pokémon which is capable of flying, the Soaring in the Sky mechanic can be accessed.

Please note the Pokemon concepts you see here may not be final.

Mega Evolutions return from Generation VI, but have been completely overhauled in the way they are accessed in the game. Now, after a Mega Stone has been collected by the player, it must be infused with the Pokémon's Pokeball to achieve the process of Mega Evolution, however, only well trained Pokémon are able to Mega Evolve.

When a Pokémon has been trained well enough to be capable of Mega Evolving, a cutscene will follow showcasing that Pokémon's evolution into it's Mega Evolved form. Mega Evolution forms are now permanent instead of only being a temporary form within battle, meaning now Mega Evolved Pokémon have their stat changes indefinitely and can now hold an item in competitive play, creating a whole new dynamic to the battling scene.

Mega Stones are considered as rare artefacts in the Fyeno region, leading to them becoming a controversial topic among citizens, as some believe they should be preserved and studied instead of being tested on Pokémon, when their long term effects haven't been determined.

Due to the very different climate in Fyeno, some Pokémon have adapted to the new environments around them and changed, becoming what is known as the Fyeno version of Pokémon which are different to the forms they hold in their natural habitat.

Many changes have been applied to the Pokémon side of the games.

Shiny Pokémon have been completely revamped for Pokémon Daybreak and Pokémon Twilight. Now, instead of each Pokémon only having one Shiny variant, each Pokémon now has at least eight unique shiny variations for the player to discover.

Shiny Pokémon are also now prone to have stat improvements compared to the standardised Pokémon.

Pokémon Daybreak and Pokémon Twilight introduces several new moves in an attempt to add more balance to the Typing System and to give some types the increased versatility in moves that they may be in need of.

A cluster of new abilities have been introduced in Pokémon Daybreak and Pokémon Twilight alongside the new Pokémon.

Technical Machines, known in short as TMs, allow a Pokémon to learn the desired move.

Below are some polls that are purely for feedback purposes. If you'd like to elaborate on anything you've voted on, please leave some feedback in the comments section below.

Twilight Version's initial logo
Add a photo to this gallery

Retrieved from "https://fantendo.fandom.com/wiki/Pokémon_Daybreak_and_Pokémon_Twilight?oldid=3306589"
Community content is available under CC-BY-SA unless otherwise noted.