Start a Wiki
Pokémon Comet and Asteroid versionsCA are the new paired Pokémon games for the Pokémon series, making up Generation VIII. They will succeed Generation VII, which consisted of Pokémon Sun and Moon and Pokémon Ultra Sun and Ultra Moon.

The versions are planned to be released on November 22, 2019 worldwide for the Nintendo Switch.

The concept for the two games was created in mid-2015, when the games were planned to serve as Generation VII. Progress for the game stalled, and the announcement of the Nintendo Switch the following year led Comet Gaming, Inc. to decide to retool the games for the new console. Thus, production took a hiatus until 2018, when development resumed on January 26, 2018.

Comet Gaming, Inc. CEO Lumoshi announced that very few concepts would remain from the original iteration of the game, which can be viewed by clicking here. Instead, the new versions would feature new content inspired by the Generation VII games, with additional influences from the older games as well.

The game will retain the core elements of prior Pokémon games. The objective is to catch wild Pokémon, defeat other trainers, and progress through a storyline. Other elements will be changed, however.

With the Nintendo Switch's much increased hardware capability over the Nintendo 3DS allowing a more advanced gameplay engine, developers retooled the movement system, making it less grid-based as the previous generations (primarily I-V) and expanded the world greatly, making the game a lot more exploration-based than progression-based, taking note from other critically-acclaimed titles such as Super Mario Odyssey and The Legend of Zelda: Breath of the Wild.

The below is a list of Pokémon from Generations I-VII that will be retyped to fit the Cosmic type. The list is incomplete thus far.

Like in Generation VII, new forms of already existing Pokémon will be included as regional variants, to be known as Verona Forms. These, unlike Alola Forms, will not be limited to just Pokémon from Generation I.

Mega Evolution will take an increased role in Pokémon Comet and Asteroid after taking a momentary hiatus from relevance in Generation VII. The forty-eight previous Mega Evolutions will return, and new ones will be added as well.

Many evolution methods will be changed.

The game is planed to include a moderate amount of new Pokémon with many returning from the other seven generations, as well.

Below follows a list of new Pokémon native to the Verona region.

The game will be set in the region of Verona, inspired primarily by southern Europe, primarily the Mediterranean coast, the Italian peninsula, and the Alps. Areas to the region's south will also be based on northern Africa. Due to southern Europe's proximity to France, which inspired the region of Kalos, there has been speculation that Verona may connect to Kalos. However, there has been no official statement by Comet Gaming, Inc. on this.

A below graphic depicts Verona, showing the geography, cities, and routes of the region. 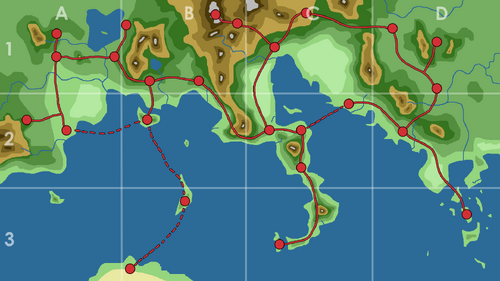 A description of locations in each quadrant follows below.

Pokémon Halls are intended to serve a very similar function to Pokémon Gyms of Generations I-VI. The difference in Pokémon Comet and Asteroid is that they also serve as political hubs, rather than just as centers where Pokémon battles take place, and that there are twelve rather than the traditional eight.

Gym Leaders are instead known as Consuls in this game, who have control of the cities the Halls are in, as well as the neighboring area. The Consuls together form the second highest governmental body in the region of Verona, with only the Emperor ranking higher.

Retrieved from "https://fantendo.fandom.com/wiki/Pok%C3%A9mon_Comet_and_Asteroid_versions?oldid=2681723"
Community content is available under CC-BY-SA unless otherwise noted.