This is a fangame of yours truly, Arend from APIM Group. Don't make any edits, but feel free to use the talk page.

Pokémon Citrine Version and Pokémon Olivine Version are two new games from the Pokémon franchise, with new Pokémon in a brand-new region, named Flevore. At the begining, it was only for the Nintendo IC, but it'll be soon for the APIM Hanabi as well, making it the first Pokémon game to be for two different systems.

This game includes the addition of a few new additional types (including but not limited to the Light type), and the Pokédex includes more than 300 new Pokémon. Mega Evolutions are still present, and introduce additional Mega Evolutions for a few Pokémon, being F, FC and FO variations (F being present in both games, FC being exclusive for Citrine and FO excluisve for Olivine). The game includes the standard eight gyms, but there are five other gyms across the region that are completely optional and only available after defeating the champion.

See here for more information about the subject.

Eeris
Add a photo to this gallery

The starter Pokémon of these games: Flitten, Snaileaf and Surchin.

Hematop
Add a photo to this gallery

Nubleum
Add a photo to this gallery 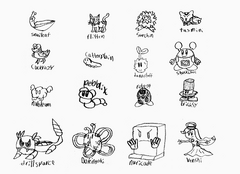 Sketches of 16 different Pokémon debuting in this game, including the Starters
Add a photo to this gallery

Retrieved from "https://fantendo.fandom.com/wiki/Pok%C3%A9mon_Citrine_and_Olivine_Versions?oldid=2505092"
Community content is available under CC-BY-SA unless otherwise noted.