Pokékart 3DS is a new racing game for the 3DS, and the first game in the Pokékart (Series). The game will include Pokémon from Gen I - Gen VI, and also some anime characters aswell. The game is in development by Moonlight Studios and will be released for the Christmas Holidays in 2013.

The game will enable the player to choose a variety of controls and modes for the game to appear in. The controls can be customised to how the player prefers it, but the game will still include a default set of controls. The game will include a number of views including the drivers view, a little back from that and far behind the kart, an overview of the track is still included though. There will be an option for the player to be able to customize their vehicles (Karts, bikes, planes (Wings only) and submarines (Propellors)), with a variety of bodies, engines, seats, wheels, gliders, propellors and decorations included, however the option for predesigned vehicles will still be available.

Each character will have two different special moves: one offensive and one defensive/miscellaneous. However, only one move can be used at a time, but they can be changed after every race. Each move is specially designed to the characters type, and no other character can have an identical move, but they can be similar.

The game will include a total of 46 characters (12 Default and 24 Unlockable), with 6 DLC being released in the following easter of 2014. Four are available by code, once all 36 in-game characters are unlocked. 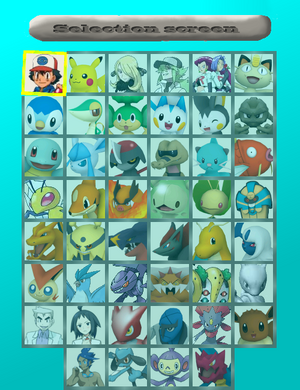 4 Characters have been confirmed to be unlocked via Cheat Codes.

Retrieved from "https://fantendo.fandom.com/wiki/Pok%C3%A9kart_3DS?oldid=3235829"
Community content is available under CC-BY-SA unless otherwise noted.