Plusle is an electric-type Pokémon that heavily resembles the Pokémon Pikachu. However, Plusle's have two positive charge symbols on their cheeks, a positive charge symbolized tail, along with several red-colored areas on the ears and body. Plusle and its opposite, Minun, make a great team when paired together in Double Battles & Rotation Battles with the use of both of their Signature Move's Helping Hand.

Plusle along with Minun were originally supposed to appear as playable characters in the Wii game Super Smash Bros. Brawl as found out by hackers who found a playable character file titled Pra & Mai which is the start of Plusle & Minun's Japanese names Prasle & Mainan, which makes it highly likely they were supposed to appear in the game as a pair like the Ice Climbers but were cut out for unknown reasons. Others simply believe it was the random button. Thus, they are now in many fanon rosters. 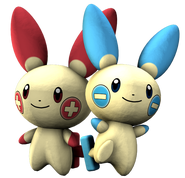 Generation VI
Add a photo to this gallery
Retrieved from "https://fantendo.fandom.com/wiki/Plusle?oldid=3200151"
Community content is available under CC-BY-SA unless otherwise noted.