Plessie is a plesiosaur that first appeared in Super Mario 3D World on the Wii U. The name Plessie is a reference to the extinct species, plesiosaur and the Loch Ness Monster which is often referred to as Nessie. Plessie is similar in appearance to Yoshi and is believed to be the same species as Dorrie who looks very similar to Plessie except is blue.

Plessie in the water with Mario, Luigi, Peach and Toad on its back. 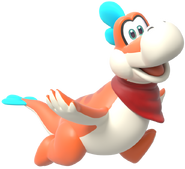