“We must do it together… All of us. In fight for leading us into extreme victory.”
—The game's tagline

PlayStation All-Stars Extreme is an upcoming 2022 fighting action video game on the PlayStation 4 and The V², it was developed by Sony Interactive Entertainment (and also published it), SIE Santa Monica Studio, Bluepoint Games and Colin Entertainment, Ltd.

In many universes of PlayStation characters from both heroes and villains is noticed about the purple polygons is spreading across their world which it could be the new attack as the characters must reach further to battle against many fighters.

During their reach as they bumped across by only one fighter is going to stop as two characters is begin to fight each other, during one fighter is finally beaten as until the main antagonist Polygon Man is the one who cause the polygon mayhem as he fight against along with Polygon All-Stars while Polygon Man take various forms.

After when Polygon Man defeated, the blue orb is absorbs the fighter as the world is finally back to normal when their got the blue force inside of them which they could protect their world or even try something with their new powers. 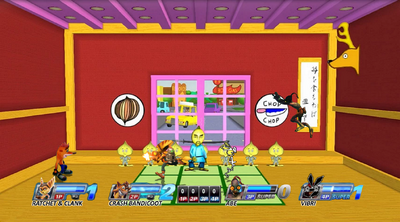 PlayStation All-Stars Extreme is a fighting gameplay and the remake of Battle Royale, similar to the Nintendo's Super Smash Bros. series. Up to four players can battle each other using characters from various Sony franchises with the recurring fighters in Battle Royale is God of War, PaRappa the Rapper, inFAMOUS and Sly Cooper, with the third-party characters like BioShock. It featured with new playable or background characters Crash Bandicoot, Spyro, Tomba!, Vib-Ribbon and many of Sony or third-party franchises, along with two characters appeared in the game who was originally appear as DLC in Battle Royale was Abe from Oddworld and Dart from The Legend of Dragoon until been scrapped.

The PlayStation Avatar is the first customizable character and debut in Extreme, it have all four fighting styles from Fighter, Swordsman, Gunsman and Mage similar to Nintendo's Mii, the avatar is later available as profile avatar on the PlayStation 4 menu.

Battles take place on a 2D plane, with players able to freely move around a stage to approach or escape their opponents. Different attacks are performed by pressing one of three attack buttons in combination with a directional input. Players damage their opponents to receive "AP" orbs that build up a power meter at the bottom of the screen. Players can also find orbs scattered across the stage during the match, or can perform throw attacks to remove AP orbs from their opponents.

Earning enough power allows players to use one of three levels of special attacks named "Super Moves" which can be used to defeat opponents and earn points. Level 1 super moves have the lowest AP cost but typically cover a short range and can only hit one character; in contrast, Level 3 supers require significant amounts of AP but have an extended duration time and can potentially defeat multiple opponents before they expire.

The starters was 39 and the unlockables was 22, many of recurring fighters from Battle Royale is 23 and newcomers debut in Extreme is 36 making about 61 characters all in total.

Check in the Stage category to see information.

Check in the Supporter Disk page to see information. 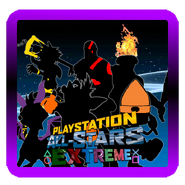 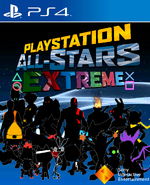 The V² early box cover
Add a photo to this gallery

Retrieved from "https://fantendo.fandom.com/wiki/PlayStation_All-Stars_Extreme?oldid=2740015"
Community content is available under CC-BY-SA unless otherwise noted.