Plague Knight is an antagonist of Shovel Knight. He is one of eight Knights of "The Order of no Quarter", a group of villainous knights who serve their leader, the Enchantress. He is the boss of The Explodatorium and is the playable protagonist of the Plague of Shadows expansion.

Plague Knight has a somewhat reckless personality and notably treats several of his allies with contempt or indifference. With the exception of Tinker Knight, he treats all of the Order of No Quarter with disrespect, often gleefully attacking them and entirely unapologetic at the Battle Royale. While he brushes off most criticism without second thought, Specter Knight is able to reduce him to stunned silence by commenting on his cowardice regarding his feelings for Mona.

He is insecure about his lack of strength and power, believing that he needs the Serum Supernus to become powerful enough for Mona to love him.

Plague Knight appears as one of the members of the Order of no Quarter and is the boss of the Explodatorium. He is later fought again during the boss rush in Tower of Fate: Ascent. When defeated for the second time, the player has the option of saving the Order of no Quarter as they are all hanging from a chain. In the epilogue, Plague Knight is seen giving alchemy lessons.

It's revealed that Plague Knight had ulterior motives for joining the Order of No Quarter; he seeks the creation of the Ultimate Potion, a brew that will grant him "unlimited power" and "anything he wants". Mona the Alchemist and several other characters are revealed to be secret allies of Plague Knight, practising Alchemy alongside him in his secret lair, the Potionarium, which he had built underneath the Village. Mona's occupation in town is, in fact, to cover up the entrance to the Potionarium, which is only accessible through her room. There, Plague Knight and Mona secretly work to concoct the Ultimate Potion.

To obtain the ingredients for it, Plague Knight must acquire essences, which can only be extracted by defeating the other members of the Order of No Quarter, along with the Enchantress and Shovel Knight. The story is retold, this time from Plague Knight's point of view, revealing that the two stories are taking place concurrently. For example, when entering the Potionarium for the first time, Shovel Knight can be seen wandering the Village.

After defeating a certain number of the Order, Plague Knight happens upon Mona and the Black Knight. A misunderstanding occurs and Mona, feeling betrayed, abandons Plague Knight as he faces Black Knight in battle once more. Upon returning to the Potionarium, he finds that Mona is still missing, forcing Percy to take on her duties while Plague Knight continues his quest.

Plague Knight ascends the Tower of Fate, having defeated the remaining Order members. When he enters the dining room, he finds all of the Order members gathered, forcing him into battling all of them while Shovel Knight recovers from a fall. Shovel Knight then battles Plague Knight, emerging victorious again and sending Plague Knight flying down to the end of the chain. Although he pulls them up, Shovel Knight does not actually lift them off of the chain and instead leaves them hanging, prompting Plague Knight to leap away using his potions. He then ascends to the top of the tower ahead of Shovel Knight and battles the Enchantress. Although he successfully fights her to a standstill, he does not defeat her nor does he free Shield Knight; the Enchantress willingly gives him her essence. Plague Knight descends the tower, and heads back to the Potionarium to complete the Ultimate Potion with the assembled essences. However, Black Knight appear yet again, alongside Mona.

Plague Knight confesses that his reason for completing the potion was he felt he was too weak for Mona to love; by using the potion, he would finally be strong enough to earn her affection. Mona admits she already does love him, after which Plague Knight attempts to stop the distillery, but fails. The potion grows too unstable, releasing a dark energy that takes on the form of Plague Knight; the Plague of Shadows, the campaign's titular antagonist. Plague Knight is forced to do battle with his shadowy doppelgänger. Upon its defeat, it then transforms into a larger, twisted version of itself; the Corrupted Essence.

Plague Knight emerges victorious, and successfully rebrews the Ultimate Potion, but realizes he no longer needs it now that Mona has admitted her love for him. The two use it to demolish the Tower of Fate, and are hailed as heroes by the townsfolk rather than outcasts, finally able to practice Alchemy without being feared. As the story ends, they can be seen dancing together. 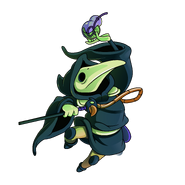 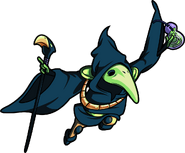 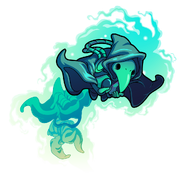 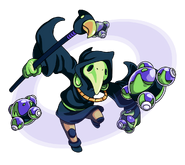 Add a photo to this gallery
Retrieved from "https://fantendo.fandom.com/wiki/Plague_Knight?oldid=2571927"
Community content is available under CC-BY-SA unless otherwise noted.