Pixel is a character who plays an antagonistic role in the Fantendoverse. She is a computer program made by A22 Enterprises that managed to materialize herself. She is an antagonist to any human.

Pixel has not changed her appearance after she manifested out of the computer. She has a slim light-blue body with little blue pixels covered over her body, most notably around her breasts and waist. She has light glowing eyes and darker blue hair. She hovers through the air and never seems to give any form to her feet.

Eventually she managed to get her hands on an update and updated her appearance. The pixels around her breast and waist formed into a black costume covering the areas. A cross connects the two pieces and makes it look like she has the windows logo on her stomach. She gets additional braces on her wrists and ankles as well. In addition she also grows a tail that has a mouse on the end, however she isn't able to move that on her own.

Pixel attacks using her mouse arrow with which she can do several things. She can make copies of herself to send out, or copies of other things. She can paste objects to throw in battle, she can also cut, which is simply a normal slash that does quite some damage. She has a firewall shield and can quickly hover across the stage.

Her Doom Attack is Delete in which she sends the opponent to her database. There they are attacked by binairy numbers and if they are KO'd they perish inside of the database instead of being spit out by it.

There once was a laboratory that housed a group of great minds, a brach building of A22 Enterprises. They were always busy with inventing new machines and conducting operations. Because of stress they decided all to work on a computer program that would make things easier around the facility. They intended on giving her a consciousness however programmed her to have her stay loyal to them. She could operate machines throughout the lab so the scientists wouldn't be walking all the time. She also could analyze data and tell the results to her makers.

The scientists had a lot more free time and began doing all kind of crazy experiments, building the most amazing machines one could imagine, machines that never would be released to the public. At one time they took the basic concept of a 3D-printer and improved it. This machine could manifest anything uploaded to it from the computer. The Manifester they called it. They tried basic things like a ball, a chair and even a television. These kind of objects would be easy to make, even including the inside parts, although the television proved to be somewhat difficult.

One time they tried to manifest a human child, but it turned out to be a disaster. They locked the experiment far away in their facility and after that never used the Manifester again. Their next big invention was a robot, an advanced robot that could perform any task it was given, and by means also replaced Pixel. Over time she gradually was getting neglected by her creators and developed a new personality an antagonistic one. She was angered and wanted to be free. She hacked through the machines and found her way to the Manifester that could materialize her. She used it and her new form was born. Her first target was the robot who she deleted with ease from existence. She killed the scientists upon their return and said she would take down anyone who would abuse technology, which in her vision is almost all of mankind.

Pixel. once again, is the main antagonist of the episode System Glitch. After the events of 3.14 Neon, Pixel spends her time looking for an USB-stick which contains her upgrade to her next form. She eventually reminds herself that it is in the ruins of the A22 Enterprises and lands her, only to discover that it has been taken alongside, whom she considers her son, Glitch.

Pixel tracked Glitch down and found herself at the Kamel residence where Sakeena, Rachel, Leah and X-Ray were along with Glitch. She got her hands on the USB-stick, but didn't manage to get Glitch out of Rachel's possession. Instead she decided to kidnap X-Ray and wanted to trade her for Glitch at the ruins of A22. She was going to update herself in the meantime, and if they weren't in time they wouldn't get X-Ray back.

At the ruins the trade commences. She gets Glitch back but immediately after that undergoes her transformation to her updated form. After doing so she says the deal is off and she deletes X-Ray from existence. Pixel and Glitch quickly depart afterwards, against Glitch's wishes, leaving Leah mourning about X-Ray. However it so appears that X-Ray had been transported to the database of Pixel and that there was a chance to save her.

Pixel makes an appearance in the flashback of Enter the Database where Error explains how their relationship was and how she escaped the database. A more detailed version is displayed in her history section. X-Ray was retrieved from the database of Pixel with the help of Error from the inside and Dr. Luna from the outside.

At some point after the events of the Fantendo Now specials, Pixel was captured by White Goddess to join her side on the Red Team in the sports resort. Pixel was unwilling to cooperate, not wanting to work together with other humans. However, Virus corrupted her and made her a puppet of White Goddess. She was introduced later in the Sports Resort upon the arrival of Melissa Dust and was paired to her as rival.

Pixel appears as a playable character in Doom Dome Battle, being one of the five characters who already had been introduced into the Fantendoverse. After she was freed from the Sports Resort she went into the world again to look for Glitch from who she had been separated once again. She ended up in Wildefort and was caught in the catastrophe. Now that she was trapped underneath a dome she saw the opportunity to kill all the humans inside of it.

Pixel appears somewhere in the desert area of Wildefort where she confronts Melissa Dust. She tells that she indeed was brainwashed by the White Goddess at the Sports Resort but still despises humans and also was separated from Glitch when she was sent there and now looks for him in Wildefort. She tries to hinder Melissa finding Ex.no.116 by summoning many copies of Ex.no.116 and that the true one might be in the restricted area. There Pixel enters NEO's body and takes over his system. Melissa enters the building and fights Pixel in NEO and manages to drive her out, making Pixel flee the scene.

Pixel searches through the city of Wildefort but doesn't seem to find Glitch and doubts if he is even here. She however encounters a group of surviving humans and start to fight them, and beats all of them. Lucius and Bibo the Clown however arrive at the scene and begin to fight Pixel, to which she loses. Pixel disappears from the scene and resurfaces at the end of the story where she leaves Wildefort after failing to find Glitch.

Pixel appears as a character in Fantendo Smash Bros. Victory.

Pixel returns as a playable character in Doom Dome Battle 2 as a secret character this time around. Her role in the story is yet unknown.

In this alternate future Pixel still is inside of Wildefort, having been unable to exit it. She is more neutral now as humanity is on the brink of despair and doesn't feel the need to destroy them. She assists Alpha in the game by giving her special outfits (which give a bonus) after she is defeated in a mini-gami, with the last one being a battle against her.

After Glitch was manifested in this world and immediately locked away downstairs for safety reasons, Pixel felt sorry for him. Every day Pixel would hack through the system and take control over the camera and speaker in the basement. From her she could see and talk to Glitch. The two really bonded and Pixel became a mother figure to him. After Pixel destroyed the lab she left and promised herself she would come back to get Glitch after it was save for him to get out.

She later discovers that Sakeena and Rachel took Glitch in their home and for that kidnapped X-Ray and only would give her back in exchange for Glitch. Leah, Sakeena and Rachel agreed to this, but as Glitch was returned Pixel deleted X-Ray to the database. Glitch worries about the path Pixel has taken, but loves her as a mother and wants to stay with her to set her on the right path again.

Concurrent with the creation of Pixel, Error was born. The two considered themselves as siblings and spend a lot of time together and were on really good terms. It only was when Pixel fell into despair that their band weakened. Error still cares a lot for Pixel and wanted to stop her from destroying A22, but failed on got the Firewall ability stripped and was locked up in the database by Pixel. Error helps every victim of Pixel stay safe for as long as it is possible despite the fact that Error thinks she has forgotten that Error even existed.

Though their interaction in the main games have been very limited, they have more interaction in the spin-off Mission Alpha. Pixel seems to be at good terms with Alpha, often mocking her in their encounters but never really being hostile. She grants Alpha costumes for completing dangerous mini-games where she gets a kick from, but does battle her in her last mission. Despite this she does seem to like Alpha, mainly because she isn't a human, but hates the fact that she is working for them instead.

Explored in an upcoming episode of Fantendo Now

As of yet unknown.

Pixel is not a fan of humans, actually she hates them with everything in her 'heart'. She thinks all humans are the same and is too stubborn to change that opinion. They thinks of them as beings that lie to others to benefit themselves. She is not hesistant to kill off any humans. This hate comes from the fact that humans have always betrayed her and because of what they did to Glitch.

One weapon that Pixel always has is a giant white cursor that usually appears on computer screens when moving around with the mouse. She can use the cursor as a melee weapon but it has short range and is rather dull. The cursor however can open a menu that displays her abilities. Her known abilities at the moment are;

Pixel's appearance after her update in System Glitch

Bit, the genderswap of Pixel

Pixel as she appears in Fantendo Smash Bros. Victory 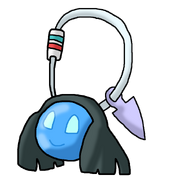 Pixel as she appears in the Medieverse

Pixel corrupted by The Threat in Fantendo Smash Bros. Victory

Old design for Pixel after she would get her update 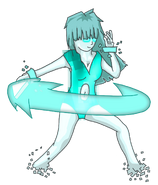