Pit is a young angel boy from the Kid Icarus Series. He is Palutena, the Goddess of Light's, most loyal servant. He usually gives himself the task of rescuing Palutena from the Goddess of Darkness, Medusa. Using the Three Sacred Treasures, Pegasus Wings, Mirror Shield and Arrows of Light, he was able to destroy Medusa's army, defeat Medusa, and save Angel Land from destruction. His most recent canon appearance was in the 2012 3DS rail shooter, Kid Icarus: Uprising.

Pit is a playable character in this game.

Pit appears in Neverworld as an ordinary angel at the beginning, however, when he decides that all are corrupt, he serves the Neverworlder, being promoted to Angel of Death.

Pit gets summoned by Palutena to defeat his dark side but, when he gets to the dark side of Skyworld they multiply and more things don't act like they seem. Will the Dark Side take over Skyworld? Pit can't handle this on his own can he? That's where his good friend Mario steps in. Angel Island soon turns ways only time can tell.

Pit's first canonical appearance in the Captain N series is in Captain N: Outskirt Warriors where he has risen to the ranks to become a general in the resistance army led by Takamaru and Little Mac. He is sick of being abandoned here in the outskirts after being one of the greatest heroes of all time and strives to return to Videoland with the others.

His naive and childish nature can sometimes be a hindrance but through his partnership with Bubbles in the army he becomes a valuable asset to the team. At the end of the game when the Master Hand freezes time Pit is rescued with several others and leaves the resistance army.

His first actual appearance in the series is in Captain N: The Game Master where he is one of the bodyguards to Princess Lara and is quick to trust Kevin where the others are more skeptical. He retains his naive and childish personality which sometimes gets the others into trouble but he is a strong fighter and helps the team.

Pit is quick to reveal his past in the outskirts to Kevin Keene and tells him about the others, he suspects this is where King Charles has been sent to that is why he stays so close to Lara to help her find her father. Pit and Link do not get along very well and are constantly at ends.

Main article: Pit (Calamity) Pit is a playable veteran that returns in Super Smash Bros. Calamity. Pit's moveset has been changed for the most part, as his aerials, and pummel and throws where changed. He also gains a new Final Smash, Great Sacred Treasures.

Pit is a playable character on Super Smash Stadium, where he functions just like he did in Smash 4. 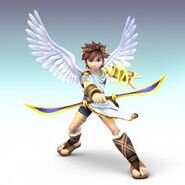 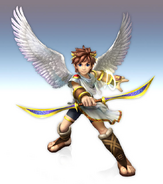 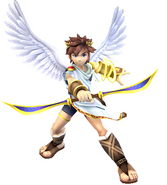 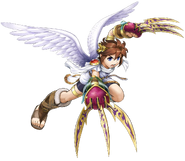 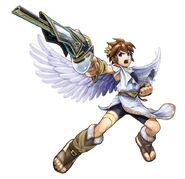 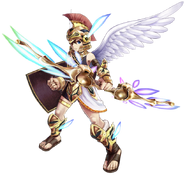 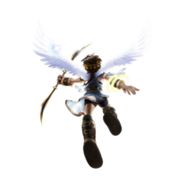 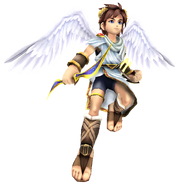 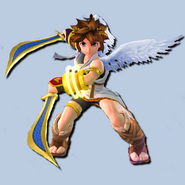 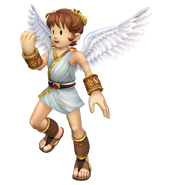 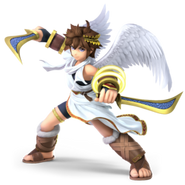 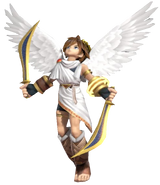 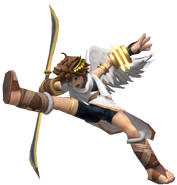 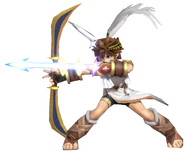 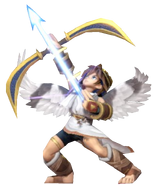 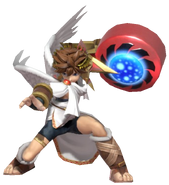 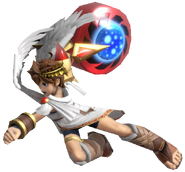 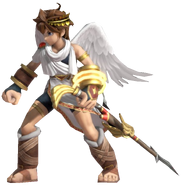 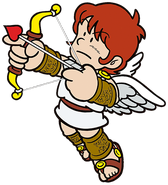 Standard Artwork from Myths and Monsters

Pit in the Cartoon Captain N: The Game Masters 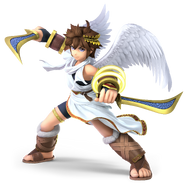