The Piranha Plant is a flower species, and also a common enemy from the Super Mario series. There appearance is that of a normal flower with a round head replacing the flower. Their heads are usually red with white spots, but they can come in a variety of colors, which occasionally affects their abilities. They are most commonly found in pipes, but have also appeared growing freely in the ground. While most are stationary, a select few have mutated, allowing them to freely walk around. Some are able to breathe fire balls.

According to a recent magazine article, Piranha Plants will appear in Yoshi's Island 2. They appear to act the same as they did it the original.

A Piranha Plant like the one seen in Mario Party DS has been confirmed as the bass line player in Mario Guitar World. Although he is not a playable character he may be playable in a future game, about extending the range of guitar to a full band.

Piranha Plant is a new playable character.His name is spelled "Phirana Plant".You unlock "him" by beating every course on time trials in under 1:10 minutes.

Piranha Plant appears in Mario Super Party as an Ally.

Piranha Plants reappear in Mario & Luigi: Powered-Up as common enemies debuting in Pine Woods. They appear all through out the area, starting at the area where Mario and Luigi land from the Sky Bridge. In addition, a species of Piranha Plant called the Pine Piranha Plant is also found, inhabiting Warp Pipes. In order to use the the pipes, the Bros. must whack them with hammer/

Piranha Planto make an appearence in the game Super Mario Moose. Like in past game, Piranha Plants typically just come out of pipes to attack.

Piranha Plants once again appear in Super Mario Moose Deluxe. They act the same as in the previous game.

In Captain Toad Treasure Tracker for Switch/3DS if you tap the Amiibo/Piranha Plant then you will unlock the Piranha Plant Boss in Boss Mode. 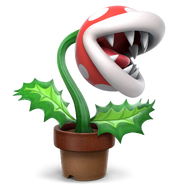 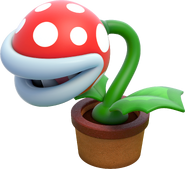 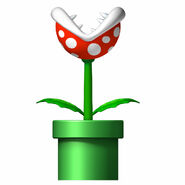 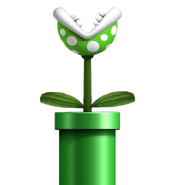 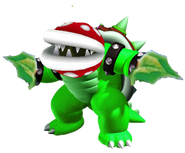 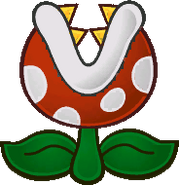 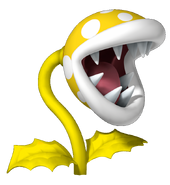 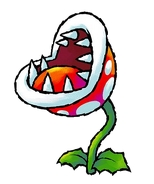 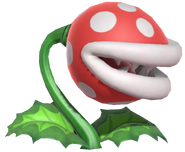 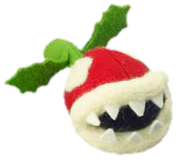 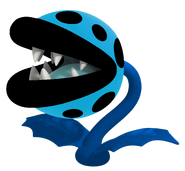