Along with Turtwig and Chimchar, Piplup is one of three starter Pokémon of Sinnoh available at the beginning of Pokémon Diamond, Pearl, and Platinum.

Piplup is a light-blue penguin-like Pokémon, which is covered in thick down to insulate against the cold. It has a dark blue head with a primarily white face and a short, yellow beak. The dark blue feathers on its head extend down its back and around its neck, which causes it to appear to be wearing a cape. There are two white ovals on its chest and a small, light-blue marking resembles a crown above its beak. It has flipper-like arms and yellow feet with three toes each.à

Piplup has a strong sense of self-pride. Because of its pride, it has a hard time accepting food from humans and bonding with its caretakers. It will even puff out its chest after it falls down, which it often does due to its poor walking abilities. However, it is a skilled swimmer that can dive for over ten minutes in order to hunt. It has also been shown to fly short distances in the anime. It lives along the seashore in colder climates. 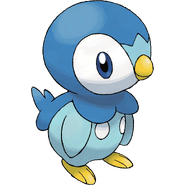