Debuted in Super Mario Bros.: The Lost Worlds on the Pink Shell Koopas. When Mario, Luigi, or Peach stomped on a Koopa, they could launch the Pink Koopa Shell to fast results.

The Pink Shell made it's Mario Kart debut as a item in Mario Kart: V² Circuit, with a triple variant as well. It acts similar to the red shell but is much faster, meaning that it is less likely to miss it's target.

Pink Koopas return in Super Mario Realms, acting similar to Red Koopas but twice as slow. Their shells are the fastest in the game. When Pink Beach Koopas enter another shell that isn't their original color, they will start bouncing up and down until you stomp them. 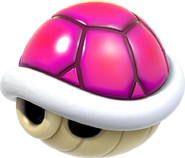 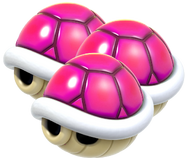 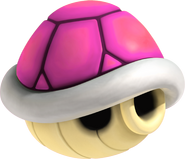 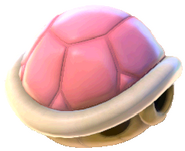 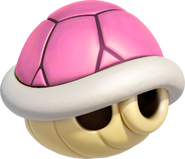 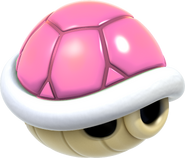 Add a photo to this gallery
Retrieved from "https://fantendo.fandom.com/wiki/Pink_Shell?oldid=3184572"
Community content is available under CC-BY-SA unless otherwise noted.