If you‘re new to the Pikmin series, I recommend you to first experience the canon games, or visit Pikipedia to get your questions answered.

Pikmin A (short for Aeroix) is a spin-off title of the Pikmin series for the Nintendo Switch. Pikmin A is more action- and combat-based instead of the typical strategy and survival.

In the game's story, the protagonists explore all the planets in the solar system of PNF-404, the planet where the events of Pikmin 1-3 took place. 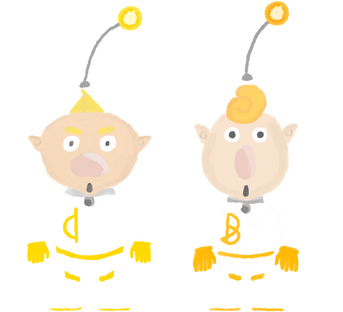 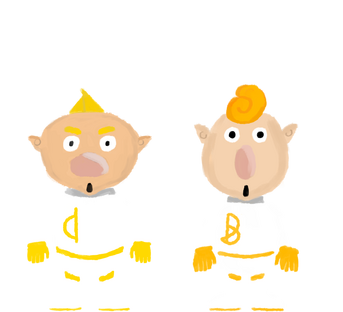 The protagonists of the game are Sebbonski (left) and Seppanski (right), who only call each other by nicknames. They are the best investigation team of SPROUTNIK Corp. from planet Bumta. Sebbonski is the older brother, and is very determined at his job. Seppanski is the younger brother, and is very undetermined. Despite their differences, they are an excellent team, and really care for each other.

The brothers both speak and write in a fictional language from their home planet Bumta, simply called "Bumtish". Similar to the languages of Hocotate and Koppai from Pikmin 2 and 3, Bumtish has all 26 letters of the alphabet and is perfectly translatable. 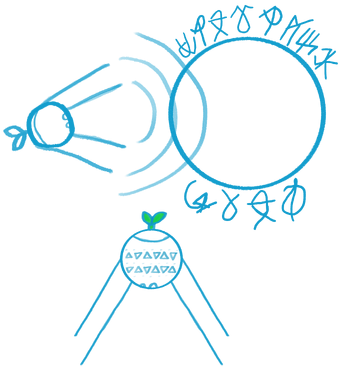 SPROUTNIK Corp. is a space cooperation investigating the Aeroix system. They send the brothers to investigate the phenomenon of PNF-404‘s neighbors suddenly developing life. 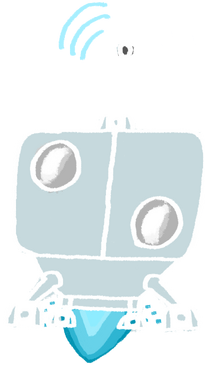 The NX is a space ship build by SPROUTNIK Corp.

As such, the brothers are investigating the Aeriox system with it.

It can split open its two segments, revealing a sort of generator, where it can absorb samples to collect them, or absorb the brothers to transfer them in and out of their cockpits, similar to the SS Drake in Pikmin 3.

Also similar to the SS Drake in Pikmin 3, the NX doesn't have its own personality like the Hocotate Freight Ship in Pikmin 2. But it does inform its users if a sample has been collected, and it can give analyses about the collected objects. 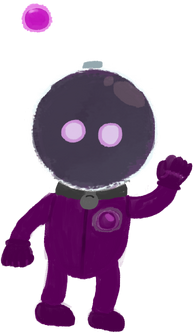 The Teks are an intellegent extraterrestrial species. Their past, origin, and even their real looks are unknown. They play the role of the antagonists. They copy life from PNF-404 to its neighbor planets with their terraforming technology. 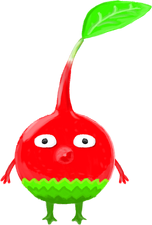 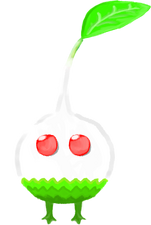 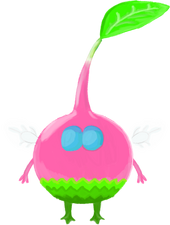 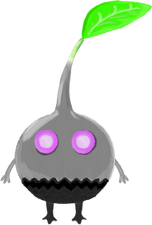 The new Pikmin the brothers find on their adventure. The brothers call them Plastmin due to their perfectly round shape for the Plaster. They have red flowers, because red is Pikmin A's symbolic color.

The new Pikmin the brothers find on their adventure. The brothers call them Plastmin due to their perfectly round shape for the Plaster. They have red flowers, because red is Pikmin A's symbolic color.

Like usual in the Pikmin series, Pikmin A features a daytime span. One day is around 20 minutes long. The brothers must plan how they take on each day. Plastmin that aren‘t in their group or near the NX by the end of the day will be lost, so the brothers have to gather their Plastmin before the day ends.

When the Day ends, the brothers enter their NX, the Plastmin enter their onion, and they all fly off to the athmosphere of the planet they are on right now.

Then the player gets statistics of the day. How many samples they found, and how many new Plastmin they grew or how many they lost. Then the Aeroix Map opens.

The Pikmin Blaster, „Plaster“ for short, is the most important gameplay element. The brothers use it to make their Plastmin fly.

Firing Plastmin with the blaster works just like throwing Pikmin in the other titles, but with way more range and power. The leaders have a cursor to target, can switch between Pikmin types and can fire them without any cooldown until they have no Pikmin following them anymore. Once they called them with their wistle, they can fire them again. 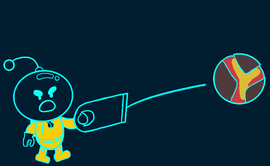 The Plaster can also fire Bomb Rocks which the brothers can collect on their way, meaning that Pikmin aren‘t needed to carry Bomb Rocks.

The Bomb Rocks are still needed to destroy Stone Walls, so the leader must always keep an eye on the Bomb Rock counter at the right bottom of the screen if he should use it or not.

If a CPU leader is attacked by a creature, he will shoot at it with energy balls. This is different than in Pikmin 3, where attacked leaders would start to panic and run in circles.

Unlike in Pikmin 1-3, the leaders CAN‘T order their Plastmin to swarm at creatures or obstacles. Instead, each Plastmin type has its own „Plast“, a shot with a special effect. 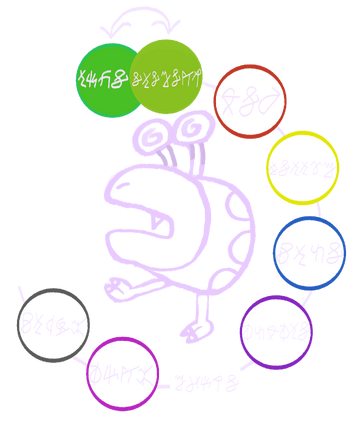 Plasts don‘t do damage. Creatures have a second gauge besides their life gauge that gets shown when they‘re hit by a Plast, and fills up with the color of that Plastmin. Once the gauge is full, the effect happens. Many creatures have to be affected by a Plast to become vulnerable.

From the Aeroix Map that opens after completing a day, the player can travel between the planets they unlocked. After defeating a boss, the next planet gets unlocked.

The player can also access the Piklopedia from the Aeroix Map and trigger a dialogue between the brothers that differs each day.

The story mode of Pikmin A.

The story takes place after the events of Pikmin 3, at an unknown time. 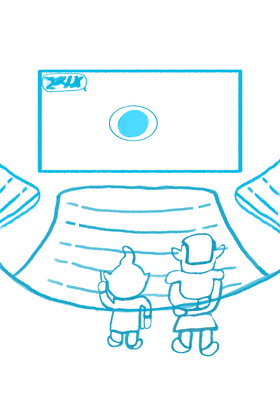 The intro cutscene introduces the space cooperation „SPROUTNIK Corp.“ on the planet „Bumta“. All members of the cooperation‘s headquarters are watching a huge screen with a portrayal of PNF-404‘s solar system.

The cutscene shows that after the events of Pikmin 3, further investigation on PNF-404 has started. There are now SPROUTNIK satellites watching its solar system, which has been named „Aeroix“.

A scientist informs the commander that the SPROUTNIKs have suddenly detected life on the other planets, similar to life on PNF-404. The commander then orders to send their best investigation team, the two brothers Sebbonski and Seppanski, to the Aeroix system.

The areas on the planets are rather small, compared to the areas in the main Pikmin titles, but they are filled with dangerous creatures and obstacles, blocking the way to progression or to samples.

Each new creature they find gets added to the Piklopedia.

Samples and creatures can still be carried like usual in the Pikmin series. The Plastmin automatically carry back found samples to the NX to collect them, and they will carry defeated creatures back to their onion to multiply. Each sample and creature has a different weight, so the brothers need to have enough Plastmin in their group to carry them back.

The areas can all be explored freely, and searched for samples and new creatures, but they all have a main goal. The main goal is always to reach the location of a signal, which then leads to a fight with a boss creature.

All planets are based on the actual planets in our solar system, and the actual order of them as well.

This mode is unlocked after beating The Adventure.

A second story that plays just after the first story ends. SPROUTNIK Corp. located strange signals in the Aeroix system. It turns out that caves appeared on the surfaces of the other planets, emiting these strange signals. They command Sebbonski and Seppanski to stay at the Aeroix system and investigate them in a Pikmin 2-like fashion.

It is called „Cave Days“ because each cave gets explored on another day, as daytime doesn‘t proceed normally inside the caves.

The brothers visit all planets of Aeroix again, but in the opposite order and with the exception of TEK and PNF-404. Meaning there is a total of 7 days.

The goal in each cave of each planet is to go through all Sublevels and collect as many treasures as possible. At the end of each cave a boss Long Legs is waiting. They don‘t need to be defeated to leave the cave, but they hold a HUGE treasure.

Every cave is located by a strange signal. After exploring the 7 caves, the SPROUTNIK gets a new strange signal, from space this time. The brothers decide to pay this last one a visit as well, and find out the truth behind the signals.

A broken SPROUTNIK is hovering there in the endless depths of space. That SPROUTNIK was manipulated by the TEKs during the battle with them. It has been reprogrammed to pay all planets a visit and terraform caves.

This mode is unlocked after finishing The Adventure.

All bosses of the Adventure have to be defeated in a row with a specific amount of Plastmin.

Before the Boss Rush starts, the brothers have to gather Plastmin in a small, completely new area. There is a total of 100 Plastmin (20 of each kind) hiding in the area that can be called with the whistle to join the team. After 60 seconds of searching the brothers return to the NX in the middle of the area and begin the boss rush.

The brothers have to survive the boss rush with all the Plastmin they could gather. If a leader gets down or all Plastmin are lost, it‘s Game Over. 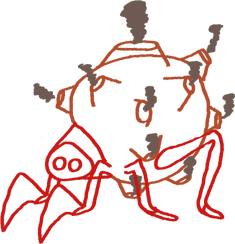 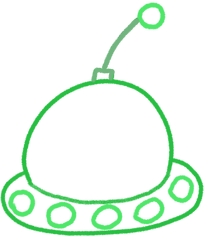 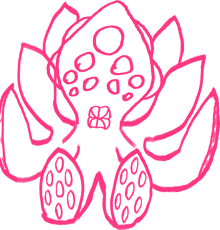 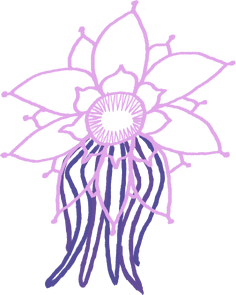 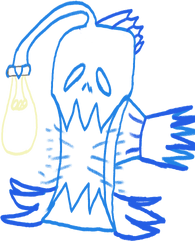 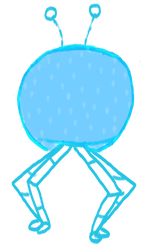 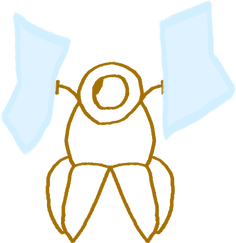 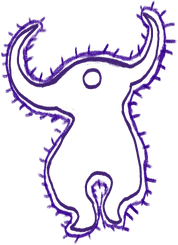 All modes can be played with 2 players via splitscreen. The game can be played local with multiple controllers or even online with a Switch friend. The maximum of Pikmin stays at 100, and the game is still over if one of the leaders is down.

The Piklopedia can be accessed in the Aeroix Map at the end of a day. The Piklopedia gives information about all Plastmin, creatures, obstacles, and even treasures the brothers found during their adventure.

It is unlocked after completing the first day.

During a conversation, the brothers agree that they are no scientists, but they still have to write their discoveries down to show SPROUTNIK what their investigations brought up. This dialouge reveals that Sebbonski is an ongoing artist and Seppanski an ongoing writer. Together they create the logs.

The logs on creatures don‘t feature scientific descriptions like the ones by Olimar, but Seppanski describes their looks and behavior, gives tips on how to defeat them.

Entries of Pikmin, treasures, and obstacles only feature Sebbonski‘s images.

The achievement system of Pikmin 3 Deluxe is back in Pikmin A. There is a total of 20 badges the player can get.