Pikmin: Ultrahunt is a first person shooter developed by Toroko and published by Nintendo for the Nintendo DS. It takes the Pikmin series into a radically new direction by putting the series in a first person pespective. It takes place after the events of Pikmin 2 on Gamecube, releasing in 2006. It stars a new protagonist, Hestia, a native of the planet Proma who comes to PNF-404 with a broken whistle and must make do by using her vaccuum gun to blast through the treacherous planet. She must recover her ship parts and do so mostly alone, although with the unwilling help of Pikmin she blasts out of her Vaccun. 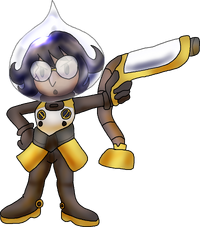 A ship from the planet of Proma ends up striking against a sudden asteroid. It's pilot, Hestia, manages to warp jump the ship to the nearby planet of PNF-404 and crash lands on the planet. Hestia goes out to recover the ship pieces, although quickly comes across a group of Orange Pikmin. Unable to communicate with them and unable to use her whistle, Hestia instead utilizes the Orange Pikmin through her Vaccun, a gun that can vaccuum the small Pikmin up and use them as ammo. Using the Orange Pikmin, Hestia is able to make headway through a viny area.

Finding one of the ship pieces, Hestia picks it up and sets up a make-shift camp, slowly learning things about the strange Pikmin, corralling them through fences and other makeshift capture devices. Hestia must find the remaining 15 ship pieces in the next 15 days, encountering more Pikmin species along the way, as well as their enemies. You can get three different endings depending on how well you do.

If you find all 15 Ship Pieces, plus all the upgrades, Hestia will be able to leave the planet on her repaired ship, allowing her to escape PNF-404 and back home. She logs the data on her return trip, finding that the data seems to line up with research done by the Hocotate people. Crossexamining the data, Hestia realizes the planet is ripe for expansion if she had a proper whistle. Back on PNF-404, a tribe of Pikmin begin to gather with crude drawings of Olimar, Louie, The President, and Hestia carved onto a wall, scratching the carvings to suggest that they will embark on war if any of them return.

If you find the necessary 10 Ship Pieces, Hestia will be able to leave the planet on her repaired ship, allowing her to escape PNF-404 and back home. She will not be able to log any data she had due to a missing part. An orange, green, and yellow Pikmin watch as she leaves, unsure if she will ever return. A group of Pikmin in tribal masks approach them, ready recruit them against their cause.

If you fail to find all 10 of the necessary ship parts by the end of the 15th day, Hestia's life support will begin to cease functioning so she attempts to leave in her unfinished ship which explodes and doesn't even lift up, destroying the camp. Pikmin in masks gather Hestia's body and send it to a Onion, where she becomes converted into a Pikmin-like creature figure. She then watches as the tribe of Pikmin begin to gather her former camp for materials to construct a shrine of a mysterious figure that looks like a undentified Olimar-like figure with three eyes.

Pikmin: Ultrahunt is unique among other Pikmin titles due to taking place in the first person and being more actively a shooter game. Hestia can vaccuum up to 5 Pikmin initially before finding upgrades that allow her to carry 10, 20, and finally 30 Pikmin. She can also use her vaccum gun to suction herself to collectible treasures which she can carry behind her and swing around similar to a mace. This prevents her from sucking up Pikmin though, so she will have to fire Pikmin already in her ammo. Additionally, she may take a weight debuff, although further into the game she will find upgrades to the suction cap that allows her to displace the weight better.

As the game progresses, Hestia is able to dump Pikmin she finds into a fencing at a make-shift base and even gather Onions to produce new Pikmin from food and enemy carcasses as well as convert existing, captured Pikmin into other types of Pikmin.

There are a total of nine types of Pikmin in Pikmin: Ultrahunt, five of which have their own Onions that can produce more of them. The other four are considered special types and must be activated from something in the enviroment to create them. 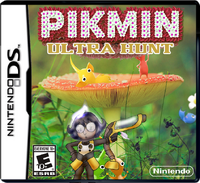 Boxart for the game 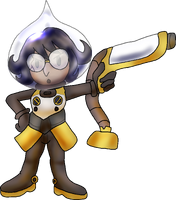 Hestia's artwork for the game 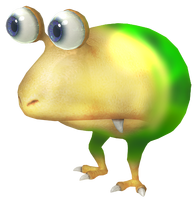 Lake Bulborb's artwork for the game 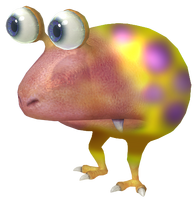 Bruiser Bulborb's artwork for the game 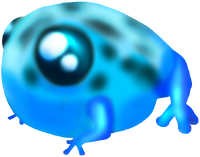 Tropical Wollywog's artwork for the game 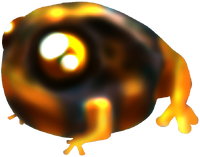 Dart Wollywog's artwork for the game

Retrieved from "https://fantendo.fandom.com/wiki/Pikmin:_Ultrahunt?oldid=3211065"
Community content is available under CC-BY-SA unless otherwise noted.