The President lands on top of a very tall tree, and Olimar is knocked unconscious on the ground, resting on a pile of leaves. The President walks over to a Red Onion, posing as a Candypop Bud for survival. It sprouts a three red Pikmin, and the President knows what to do. He enlarges his army until he has about 20 Pikmin. Suddenly, sheargrubs emerge from the bark of the trees and attack the President. They are the female versions, so they cannot do much harm. He defeats them and encounters a mushroom shaped object. He throws Pikmin at it, and it releases spores, shrouding all of his pikmin. His built-in gadget that functions much like the ship from the second Pikmin game tells him that the mushroom was to blame. The President throws them all off, and they revert to normal. The Pikmin dash toward a bunch of leafs and jump off of the branch, and the President follows, down to Olimar. Olimar wakes up as he is covered with Pikmin, and laughs. He is happy to see the creatures once more. Olimar is astounded that the Pikmin have learned to glide with leaves. The President's gadget says that there is leftover treasure stuck in the ground. Olimar throw the pikmin to pull it out. The sun begins to set, and the two captains hear wild fauna. They return to the ship as the red pikmin climb up the tree via a branch.

The next day Olimar and the President have minor encounters with the bandits, only seeing shadows upon walls. They give chase. Eventually they conclude that the bandits are hiding in a cave. There is a capsule on top of a wall, but there is no way to get to it. They find the bandits; A man, a woman, and Olimar's Son! Olimar notices that its his son, and his son runs to him. After a reunion, the two other unnamed bandits run off, still greedy. Olimar and the President work together to toss Olimar's son to a high ledge. Olimar's son sees a lime-green candypop bud, throwing Pikmin inside. After plucking a sprout, the green Pikmin emerge. Olimar's son names them Mantis Pikmin, as they have bladed arms. The Pikmin playfully slashes, and Olimar's son hops down. They throw the Mantis Pikmin at the wall, and they bring the capsule down to the S.S. Hocota. The President is confused by the Mantis Pikmin, as if he had not seen Pikmin until now. The three go back up to the surface.

When the crew reaches the Forest of Confidence, the two bandit figures appear again. Collecting an important treasure from a cave inside the Forest helps them reach new areas, and even catch up with the villainous bandits. They learn that the bandits are named Bouzo and Pychu, and they soon run off after snagging a treasure with the help of Pikmin, restricting Olimar and co.'s army numbers.

In the Broil-Lands Bouzo and Pychu encounter the Yellow Pikmin and Bomb-Rocks, which they use to get past a Dozing Meerslug. This paves the way for Olimar and co. to visit the Hot-Hole cave. Shortly after, they too will come across the Yellow Pikmin. After the next cave is completed, the Volcano in the area erupts.

When they lift off from the Broil-Lands, their ship malfunctions, and it flings Olimar faraway. Olimar discovers Rose Pikmin in the Prairie of Prosperity. They assist him in getting through brambles. Soon Olimar meets up with his Son and the President. His son is quite happy to see him, but his President is not the same. He does exactly appear the most sentimental, but is glad Olimar is there. Olimar's son looks up, and sees Louie! Louie is resting on a branch with Dweevils, and Olimar's son's call awakes him. Louie gets angry, and Olimar tells Louie not to yell at his son. Louie complains some more and goes back to sleep. This makes the President angry and tries punching the tree bark for some reason.

Captain Olimar is the game's main Protagonist. He is responsible for finding the Pikmin species, and repaying the debt of his Company, Hocotate Freight. He discovers Red, Yellow, Blue, Purple, White and Rose Pikmin, as well as Wogmin and Bulbmin. Suit Colour: Red

The President commanded Olimar and Louie to search for treasure to repay the Company's debt in Pikmin 2, but when Louie goes missing after the debt is repaid, the President goes to planet with Olimar! Suit Colour: Blue

Louie was stranded on the Pikmin planet several times. When Alph, Birttany and Charlie gave Olimar a lift home to Hocotate, Alph mentions that Louie had not gone onboard. It appears that after causing the debt of Hocotate Freight, Louie would rather not stay on Hocotate. Suit Colour: Turquoise

Olimar's son decided to join a gang of money-greedy bandits for a free ride to the Planet of Pikmin, since his dad wouldn't take him. He is the namer and first discoverer of Mantis Pikmin. Suit Colour: Green

The brawn of the bandits who went to PNF-404 for pokos. Bouzo is not very smart, and even a bit clumsy, however he does know certain things, especially how to utilize the Pikmin perfectly. Every one assumes Bouzo has no clue what is going on, but he does know, he just won't speak up... Suit Colour: Black

The brains of the bandits who went to PNF-404 for pokos. Pychu can handle strategy better than Bouzo, but she does not know how exactly to bypass large barriers, which she turns to Bouzo for. Suit Colour: Purple

While on the adventure, Olimar and co. will have conversations with characters back on Hocotate. The minor characters appear in 3D Models, like the other characters. They can be seen using body language while in a LIVE video conversation.

Olimar contacts his family every night. Occasionally his wife will respond with a mail message. Most of her messages are in between day 3-42. She sometimes mentions that Bulbie is getting ready to go the circus, which can cause Olimar's son to butt into the coversation.

Throughout the game, Olimar will have "flashbacks" about his daughter. These are mostly obscure tips for the game. Olimar's daughter can appear sometimes and join in the conversation of Olimar and his wife.
“Hey dad...? Don't forget to buckle your wriststraps. I don't want you falling off the mountain! Don't forget your sickles, either. ”
— Olimar's Daughter, A flashback subtly referring to the ability of Mantis PIkmin.

Bulbie is mentioned throughout Olimar's Wife and Daughter's conversations. In fact, he can even appear instead of Olimar's Wife, resulting in Olimar waving at Bulbie, and him mumbling about possibly sending his son back home.

The President will reminsce about his wife while idle. "Wife...money...wife...greedmoneypokos...wife...huh?!" and does not make any other mention.

Once in a while, it will be Louie talking to his Grandmother instead of Olimar to his wife. Louie's Grandmother mentions slight things about Louie's past, such as even more tales of bugs.

“Louie dear, do you remember when I made you eat a Spriggle Hop? It gave you a case of the Hocotation-Bounce, didn't it? Can you ever forgive me?”
— Louie's Grandmother, mentioning a tale about a bug known as the Spriggle Hop

Olimar checks in with the Koppaites whom visited the planet for fruit. Alph says that they are doing well, and he even got a new space-suit: the Kopocate 3500 ABC. On one day, Alph will notice that Olimar has a son, and begin wondering how the rest of his family would like to meet Olimar and his family.

Captain Charlie's rubber duck can appear instead of Charlie himself, which makes Charlie the least likely appearing character in Pikmin: Spore Outbreak.

The game plays similar to both Pikmin 2 and Pikmin 3. It includes all of the hazards from Pikmin 2 as well as introducing new ones, and brings back the gameplay and A.I. mechanics from Pikmin 3. Caves are back, and they bring some of the most difficult challenges Olimar has ever faced.

Bouzo and Pychu are bandits greedy for pokos. While they scavenge for money, certain days will allow you to have a higher or lower number of Pikmin in your squad. (Usually about 7-16 less, as Bouzo and Pychu use those numbers) Occasionally, their numbers will go down as well, as if their Pikmin are being killed. They will never experience a Pikmin extinction, however. As likely as it is, you will never engage them while you explore, except in Cut-scenes.

Like all Pikmin games, there are boss creatures to battle, usually having a specific strategy for each.

Like all Pikmin games, they introduce new enemies in each game, and this game is no different.

The puffstools hid away for a migration from Pikmin 2 and 3, and return to infect the indigenous life. Olimar classifies them all as the family "Sporovid(?)".

Of course, what would a Pikmin game be without Pikmin?

All Pikmin, including the ones found in Pikmin 2 and 3 are present in Challenge Mode.

The Mantis Pikmin and Wogmin have these flowers upon their sprouts. They are the colour of the fourth generation of Pikmin.

Pikmin Labyrinth is the 2-Player versus mode in Pikmin: Spore Outbreak. Players have 7 minutes to collect as many enemies and treasures as they can before the two Players battle each other. There are Candypop buds scattered throughout the maps, should the players want to increase their team-type. Just as Pikmin 3, the leaves, buds and flowers are the same as the colour of the team they are on. It can be played in 1v1 or 2v2, like Pikmin 3's Bingo Battle. In 1v1, either player can choose their character, however in 2v2, there are three different pre-selected duos; Olimar and Olimar's son, the President and Louie, and Bouzo and Pychu. As with Pikmin 3, there are three slightly different layouts for each Map, with different hazards or variety of enemies.

Defeating enemies and bringing them to the Onion will allow you to choose 10 maximum to assist you in your battle against the other player, but they come at a cost of losing pikmin. The cost of a creature is half of the seed value of the creature. (If it is an odd number, then it will become the number of one lower) 16 Seed value = 8 less Pikmin, 15 seed value = 7 less Pikmin. Remember, only 50 maximum Pikmin for each Team. You cannot have less than 10 Pikmin to start the duel, resulting in being unable to select all possible creatures if you choose too many with a high cost. *Both armies are given 50 to start the duel with, although that will change when they choose to bring in creatures* 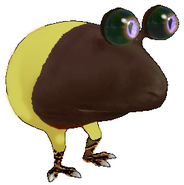 The Wogmin!
Add a photo to this gallery
Retrieved from "https://fantendo.fandom.com/wiki/Pikmin:_Spore_Outbreak?oldid=2032952"
Community content is available under CC-BY-SA unless otherwise noted.