Pignite is a bipedal, pig-like Pokémon. Its chubby body is orange with brown bands around its shoulders, sides, belly, hands, and from the back of its head down its snout. Yellow bands encircle its wrists, and swirled yellow designs bulge from its chest. It has a red pig-like nose, pointed ears, and two pointed teeth that protrude from its lower jaw. Its hands have two claws each, while its feet have only a single nail. Its tail is curled with a tuft of fur at the tip.

Pignite has a fire in its stomach, which it fuels with food. The intensity of this flame increases as fuel is added or when Pignite is angered. As the flame grows stronger, Pignite's speed increases. When in trouble, Pignite emits smoke. Its signature move is Heat Crash.

Pignite is an unlockable character in Super Smash Bros. Endgame. He is a heavyweight character. 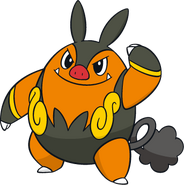 Dream World Artwork
Add a photo to this gallery
Retrieved from "https://fantendo.fandom.com/wiki/Pignite?oldid=3201656"
Community content is available under CC-BY-SA unless otherwise noted.