Fantendo - Game Ideas & More
Register
Don't have an account?
Sign In
Advertisement
in: Articles under Construction, Characters, Koopalings,
and 4 more

View source
“Well, I don't really hear any flies or purple in it. A plan can't be a plan without flies or purple!”
— Pietro Koopa, Talking to Kupper in LarryDS who is coming up with a plan to get revenge on Larry

Pietro Koopa is a Koopaling (I guess) of Earth. His full name is Pietro Le Cancre Koopa given to him by Bowser. Like many Koopalings, he portrays a particular bad behaviour In Pietro's case, he is displayed as being rude and obnoxious towards others as well as being selfish and a slob. Pietro is very close minded with his opinions, believing that many individuals such as Rosalina and Octoombas are aliens. Pietro has been known to attempt to (albeit poorly) troll people into believing anything he says.

Pietro's birth is a bit of a mystery, the egg he hatched from was stolen from its nest a few days before it hatched, Iggy was able to retrieve the egg however on his way back tripped and fell causing the egg to shatter and Pietro being born prematurely, this is indicated by his relatively small size and lack of higher brain functions.

During his first few years, Pietro got to know the other Koopalings and unlike the other Koopalings he was unable to develop any significant relationships with them. He holds a grudge against Poopbutt for some reason although this might be due to Poopbutt being a literal turd and Pietro's desire to be the ultimate Slob. Pietro often found that his best abilities in battle are his peculiar behaviour which generally confuses any foe he faces as well as his new-ish developed ability to breathe fire like other Koopalings.

As he got older, Pietro was gifted with a Bubble Wand, by an unknown assailant, Pietro began to use the Bubble Wand in his battles as his last-ditch effort, he also later learnt how to perform a very weak and relatively ineffective Ground Pound which is likely to develop as he ages. Pietro has also delved into the capabilities of the Poison Mushroom using its power in combination with the Bubble Wand to create Toxic Bubble that release a hallucinogenic gas when burst.

Due to his lack of higher intelligence developing, Pietro is rather limited in his capacity to think. He initially was unsure of who his parents were and made the assumption that Iggy was at least one of his parents. Pietro has often been known to try and convince Iggy and Lemmy to help him with his schemes. However, he is often replied to with a sigh and rolled eyes.

Pietro often attempts to disgust or scare people including other Koopalings. However due to his immaturity and lack of intelligence, he just comes off as annoying which the other Koopalings have been known to use against him. He also has attempted on multiple occasions to use the other Koopalings wands. However, due to the dark magic imbued in each one, he is unable to utilize their powers correctly.

Pietro is also a prankster and overtly social, this has caused him issues in the past due to his annoying behaviour and tedious attempts to trick others. This in combination with his determination to get under everyone's skin has often landed him in trouble with Bowser.

Pietro appears to be a very small Koopaling, he is less than a foot tall which often gives him trouble when fighting Mario or the other heroes. He is also very light which has allowed him to be able to float on his bubbles to escape. In addition, Pietro has turquoise hair which spikes up with two points forming a V shape.

He has a small, round body like other younger Koopalings and a green head with blue stripes. In addition, Pietro has a green & blue shell with yellow-ish spikes. Like all Koopalings, he has three-toed feet and four-fingered hands as well as the common spike bracelets around his wrists. Pietro's bracelets for some reason are coloured dark cyan.

Pietro has yet to make a proper appearance in a Video Game although has made Cameos in others as well as appearing in artwork for several Super Mario Anniversary Editions, he seems to have been conceived on the 30th Anniversary although artwork for him didn't start to appear until the 45th Anniversary.

A diagram for the refurbishment of Peitro Koopa in Excellent Collision Siblings "FORE!". He is often inclined to revamp his proboscis.

The definitive diagram for Pietro (Petr Koopa); it's almost as if he had never returned to his loving family!

This Is GoldyFish110's Old Design For Pietro(Which was called Petr Koopa) The Petr Design was scrapped due to the number of people who don't like luigi like koopalings, you know similar or should i say "recolors" 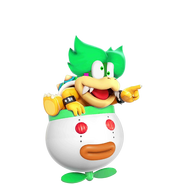 It is Pietro in Mario and Luigi Paper Jam Styled

His new design in paper jam by GoldyFish110 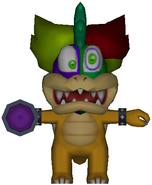 This Is His current New Design, I still think there is something off about this one, I just don't know what it is 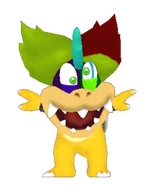 GoldyFish110 - I made a new artwork for Pietro out of MK8 models, I have the posable model I can try making other fan koopaling models with the MK8 models if anyone wants me to and if I'm not booked on stuff

This image shows a height change (from 8 inches to 1 foot 8 inches) I can no longer have him being 8 inches tall, I put Larry at 106 centimeters scaling him to Mario who is at 139 centimeters 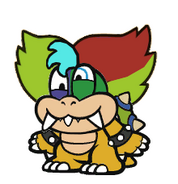 Pietro sees Iggy as his Master, and will only do what Iggy tells him to do, if Bowser tells him to do something, he wont listen, because he doesn't like Bowser because Bowser likes Peach and he doesn't like Peach (for some reason) Pietro (despite being dumb) will even program an entire robot in the span of a few seconds if Iggy told him to do that