Pidgeot (Japanese: ピジョット Pigeot) is a dual-type Normal/Flying Pokémon. It evolves from Pidgeotto starting at level 36. It is the final form of Pidgey. It can Mega Evolve into Mega Pidgeot using the Pidgeotite.

Pidgeot is an avian Pokémon with large wings, sharp talons, and a short, hooked beak. Its glossy plumage is mostly brown with cream-colored underparts and flight feathers. Its head is decorated with a red and yellow crest that is nearly as long as its body. The fan-like feathers of its tail are red. Its beak and legs are pink, and there are angular black markings around its eyes.

Mega Pidgeot has an even more elaborate crest on its head, with a streamer-like red plume extending from a mane of yellow feathers. It has a feather projecting from the front and a highlight on the left side of the crest which are also red. The crest is sensitive to air currents, acting like a large antenna and stabilizing Mega Pidgeot's flight. Pidgeot grows noticeably when it Mega Evolves, with a larger body and longer, broader wings. With its increased power, it is capable of whipping up gusts that can smash huge trees. Its wingtips and tailfeathers are bordered with blue, and its irises are red in color.

Its powerful wings are capable of stirring up windstorms in just a few flaps, and it may spread its wings to intimidate enemies. This Pokémon is capable of flying faster than the speed of sound. Its plumage is often described as beautiful, making it a popular choice for skilled Trainers. Pidgeot typically dwells in forests with thick growth and large trees. It is known to prey on Magikarp, which it can spot from great heights.

Despite its name, its appearance and behavior do not resemble a pigeon so much as that of a bird of prey, particularly an eagle, osprey, or a falcon. In particular, its Shiny coloration resembles a Golden Eagle. Its eye markings strongly resemble the Sun/Sky gods of Egyptian mythology; Ra and Horus.

Pidgeot and Pigeot are combinations of pigeon and jet (referring to its great speeds). 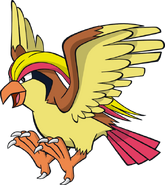 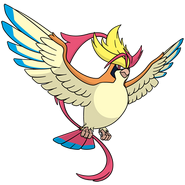 Generation VI (Mega)
Add a photo to this gallery
Retrieved from "https://fantendo.fandom.com/wiki/Pidgeot?oldid=3200104"
Community content is available under CC-BY-SA unless otherwise noted.