Pico is an F-Zero pilot in the F-Zero series. He pilots the Wild Goose.

Pico was a former soldier enlisted in the Polipoto Army and the leader of a special fighting unit. It's unknown as to the reason why he eventually left the ranks, most likely due to his uncontrollable temper, vicious strength, and merciless demeanor. He later took up the position of a hitman-for-hire, putting his iron will and sharp-edge focus to proper use, well-fitting for such a violent creature. But Pico's tie-ins with many big-name criminals such as Zoda eventually marked him as a major target for the Galactic Space Federation and he went on the run. He eventually stumbled across the F-Zero circuit and signed up in order to conceal himself among the throngs of competitors. He arranged an underground business to build the Wild Goose for him and the Federation hasn't been able to catch him to date.

Pico appears with his machine the Wild Goose as a collectable trophy in Super Smash Bros. Universe. In addition, his machine can be seen racing on several of the F-Zero stages as a stage hazard.

Pico returns once again in F-Zero U. Pico is 134 years old due to the game taking place 10 years after F-Zero GX, and is no longer the only member of his species participating in the race, for one of his former comerades, Gallo appears as a playable character.

Pico makes his debut as a playable character in the Super Smash Bros. in Jake's Super Smash Bros., where he is classified as an "Echo Fighter" due to his moveset being based on Captain Falcon's. As a clone of the aforementioned bounty hunter, Pico's attacks have little in the way of originality, though the Polipoto veteran does have more-wild movements and more-powerful attacks at the cost of being slower and heavier. Much like Captain Falcon, Pico summons his F-Zero vehicle, the Wild Goose, to launch foes in his Final Smash. 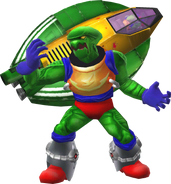 Add a photo to this gallery
Retrieved from "https://fantendo.fandom.com/wiki/Pico?oldid=3204288"
Community content is available under CC-BY-SA unless otherwise noted.