Pichu is an Electric type Generation II Pokémon. It evolves into Pikachu when leveled up with high friendship, and eventually evolves into Raichu via Thunder Stone.

Pichu is known to be playful, mischievous, and social, and can be often be found in groups with others like it. It can't store too much electricity in its cheek pockets; it may even wind up harming itself during a discharge.

Pichu is voiced by Satomi Kourogi.

Pichu, The Tiny Mouse Pokémon, Pichu is capable of producing electrical sparks from its cheeks. However, since Pichu is only a baby, it cannot control them as well, and may release electricity unintentionally. Fortunately, it is not able to store large amounts of electricity in its body.

Pichu's Smash and aerial attacks can KO opponents at as low as 80% damage. However, it can also harm itself with each electric attack it uses, and can be knocked around very easily due to its low weight.

A Pichu named Marcus Litle P is a main character of the series.

Pichu appears as a sidekick to the main protagonist Pikachu. He can be unlocked after clearing World 3.

Pichu is confirmed to be a playable character in Super Smash Bros. Revolution, acting as a clone of Pikachu.

Pichu is the titular character in the Nintendo DS simulation game Hey You, Pichu!. A Pichu is the first pokemon that the player receives. Multiple Pichus may be received during the game.

A Pichu is the main character of the series, and is also the hero of the Earth. The Pichu from this game is known as Paucha, and made his first appearance in PichuQuest.

Pichu is a Level 1 Summon who can is available from the start in KirbiMiroir's World. Pichu costs 6 MP to summon and when summoned, casts Thunder Shock, which deals low Lightning damage to all foes.

Pichu appears as an unlockable playable character in Stampede Breakfast 2. In this game, Pichu has the unique ability to use stronger, more effective attacks by holding the attack or special button at the cost of taking recoil damage. This serves as a replacement for Pichu's self-damage feature in Super Smash Bros. Melee, and it overall makes it a more viable character by comparison.

Pichu makes a surprise reappearance in the Super Smash Bros. series, after being absent from Super Smash Bros. Melee, in Super Smash Bros. Calamity, as a downloadable character for the "Returning" fighter pack along with Snake and Young Link. Pichu is no longer a clone of Pikachu, as majority of its moves have been replaced with new moves. However, it still hurts itself from using electricity moves, so to slightly compensate this flaw, Pichu is heavier than it was before, and its new moveset has less moves that use electricity. 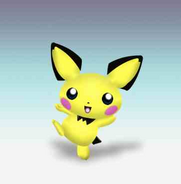 Pichu by Wilt B on DeviantART.

Pichu alternate costumes by Wilt B on DeviantART. 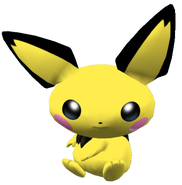 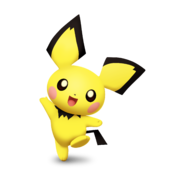 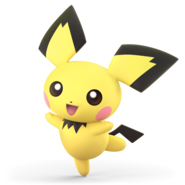 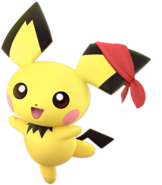 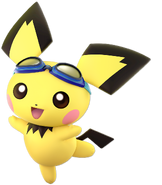 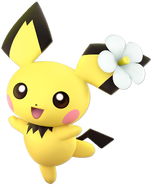 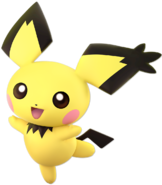 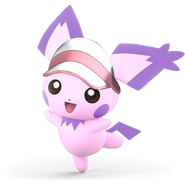 Pichu's Rosa alternate costume from Your Own Smash Bros! 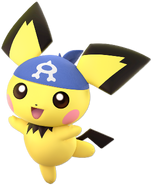 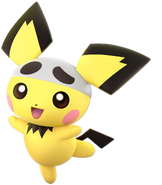 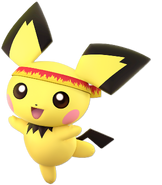 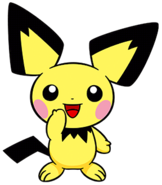 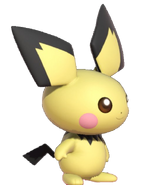 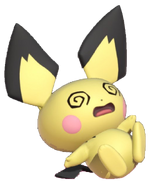 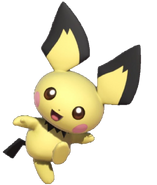 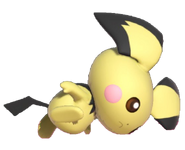 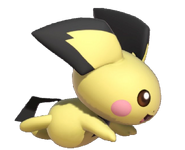 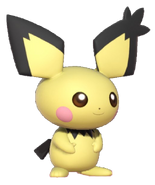 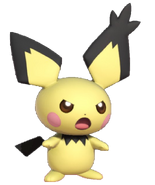 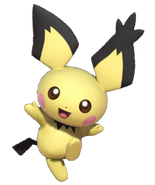 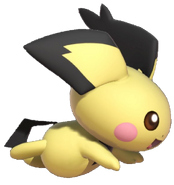 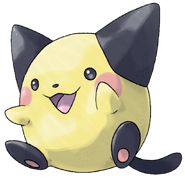 Pichu meet with Early Design Itself by Wabatte-Meru from Deviantart 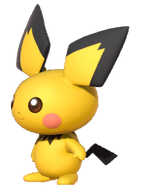 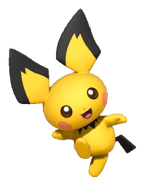 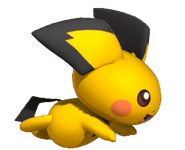