The game follows January, a sweet little girl who ends up in Greensward Magic and has to stop Monochrome from changing all the delight in the world into horrible creatures.

A small girl sits on a train, lying down across two seats, asleep. She awakes to a bump on the train tracks and sits up straight, thinking about life and all her problems and trying to erase them. The girl is planning a new life for wherever the end of the line is.

The girl looks out the window to find the train seemingly in the sky, and everyone else inside the train as disappeared. Her skin goes pale and she becomes quickly frightened. Soon the train finally lands on the ground in some strange mystical place.

She steps off the train into a void of darkness when a mage named Troid welcomes her to Greensward Magic, and the world lightens up back to its former magical place. Troid announces the girl as now being named January and welcomes her to the world that can only be reached once you have mental clarity.

The land breaks into large harmony, with all the peculiar little people in many different forms celebrating. Troid quickly shuffles January off to where she will choose her spirit fruit, which subsequently is the apple. Troid hands her an apple and it magically lights up, and January's soul is split to turn this apple into a living being and part of January, which she calls Granny Smith.

Phantom Delights is a hybrid of Peggle and pinball. The objective is to destroy the phantom delights that plague the level by hitting them with a Delight Carrier. Their are two kinds of objects that you can shoot, Delights and Delight Carriers.

You have 10 Delights and a predetermined amount of Delight Carriers that changes from level to level. Ordinary Delights can get rid of ordinary delights, but if they hit a phantom delight they will stop moving and act like one of the delights that starts on the game board.

Delight Carriers cannot get rid of ordinary delights but will put a phantom delight inside of them and take it off the game board. You only have a certain amount of Delight Carriers so you need to use them wisely to pass the level. 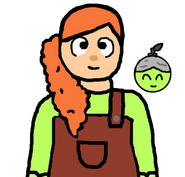 Concept art of Greensward Magic
Add a photo to this gallery
Retrieved from "https://fantendo.fandom.com/wiki/Phantom_Delights?oldid=3249663"
Community content is available under CC-BY-SA unless otherwise noted.