Petilil is a female-exclusive species, without a male counterpart. Most of it's body is light green, although it has a white face. It has three leaves on it's head that are very bitter, but that revitalise tired bodies, especially when made into an infusion. If one of them falls off, it grows right back. It prefers places with fertile soil; areas where Petilil can be found are good for growing plants. It's lower body is composed of five stubs, two of which are "arms" and two of which are "legs". It has a green "bib" around it's neck and red, oval-shaped eyes. 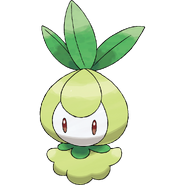 Sprite from the 3DS games
Community content is available under CC-BY-SA unless otherwise noted.
Advertisement