Petey's Adventure (also called Petey's Day Out in Japan and Petey's Big Game: The Piranha Pilgrimage in Europe) is a 2.5D platformer for the Nintendo Switch and Pharo, developed by Crash Co. and published by Nintendo. It notably stars Petey Piranha, and is the first game to have him as the titular character and the fourth Mario platformer to star another character, following Yoshi's Island, Donkey Kong Country, and Wario Land. Differing from these games, Petey's Adventure goes for more of a beat-em-up, and takes inspiration from the Kirby series in that regard. Elements of the other aforementioned platformers are mixed into the game as well. The game is also known for its bizarre humor and pop culture references.

The game was released worldwide on the Nintendo Switch and Pharo. In addition, a special bundle was released, which included special Petey Piranha-themed Pharo controllers.

The story opens on Petey Piranha, laying down on his hammock and watching a makeshift television, flipping through the channels with his remote. However, the sky becomes darkened, and storm clouds begin appearing. Confused, Petey investigates as his nearby friends, King Boo, Boo, Wiggler, and Blooper begin noticing the storm. An opening appears in the clouds as strange aliens begin emerging from the sky, and begin flying around. These aliens begin uprooting nearby Piranha Plants from the ground and begin taking them away. Enraged, Petey attempts to help them before being stopped by an alien, which he easily knocks out. The large Piranha Plant and his team unites to rescue the Piranha Plants, starting with the ones on Pipe Island.

Petey's Adventure is a 2.5D platformer. The player treks around linear stages, with the goal simply being to enter the Goal Pipe at the end of each level. The game is divided into several worlds with varying themes, ranging from simple ones to grasslands, deserts, and snowy mountains, to more unorthodoxed ones like a world based on Mario games from the NES and SNES, a haunted mansion, and outer space. Every playable character has a set of different attacks that they can use to take out enemies and bosses. In addition, the characters have their own special attack, performed when a Super Meter is charged. To charge it, the player must defeat enemies and collecting Petals.

Though the game can simply be completed by dashing through every level as quick as possible, there are several hidden collectables throughout the level. Similar to the Yoshi's Island series, these collectables are counted towards a score in the end of the level, with the maximum amount of points being 100. After completing a level, it can be replayed again to clear some missions of said level, which are similar to the ones found in Sonic Generations. The levels are also significantly longer than most levels, and have a mid-boss to defeat before reaching the checkpoint. However, when re-entering a level from the world map players are able to select which checkpoint to appear from in order to make collecting missing items easier.

Another key feature in the game is items, which act very similarly to the Super Smash Bros. series. These items will randomly appear, and using them can either help the player or harm opponents. Some of these items make references to other media. Expamples of these include P's Journal (a reference to D's Journal from Bravely Default), the Liberty Shield (a reference to Captain America's shield from the Marvel universe), Monster Spheres (references to Poké Balls in the Pokémon series), and the PoniPlushies (a reference to My Little Pony merchandise). Each item has their own varied and unique uses.

By gaining points after clearing levels, players are also able to unlock special cards, which explain various enemies, characters, items, and areas. Some cards are unlocked via special conditions, though.

The worlds in Petey's Adventure are separated into seven islands, each with three worlds. Once the worlds of Pipe Island are beaten, any of the five other islands can be played in any order. A final world is unlocked after these worlds are beaten, and three bonus worlds are unlocked after certain conditions are met; find the seven Insanity Pearls, get 100 points in all the main levels, and complete all of the challenges in the game. In total, this adds up to 26 worlds. 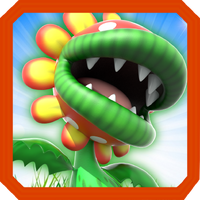 Pharo menu icon for Petey's Adventure.
Add a photo to this gallery
Retrieved from "https://fantendo.fandom.com/wiki/Petey%27s_Adventure?oldid=2544833"
Community content is available under CC-BY-SA unless otherwise noted.