The game features characters from Persona 3, Persona 4, Persona 5 and Persona 6.

The P6 protagonist calls her/his friends to help her/him investigate a new online VR game called "The Shadow's Labyrinth." They are then attended by the P6 Velvet Room attendant(s), who gives them goggles to try that game, immediately, they log in and enter the cyber world, but the second they get in the internet, glitches appeared and created creatures based on the Shadow-Selves called "Cybernetic Shadows". Eventually they will meet the other Wild Cards who also got trapped in the internet by the mastermind behind these glitches: The Mother Computer System, a supernatural virus who wants to get in the real world and destroy it to rise her domains and make it a bug.

Now is up to them to destroy her and save the internet, the VR game, and the real world.

Ren calls everyone for their normal Phantom Thieves meeting. And they also managed to contact Akechi and Yoshizawa to help them. And their story takes place during the events of the third semester. Once the nav is ready, they head to Mementos to investigate any strange occurrences. But they also see that Mementos is glitching. So they find a portal and Mona just drives everyone in.

The Investigation Team are at Junes. Yosuke sees if anyone's watching, but it's all clear. So everyone jumps in the TV World, but once in, they starts seeing all of these glitchy screens around them. Hence, they enter the internet instead of the TV.

SEES is exploring the dark hour like normal. Once they exterminate a Shadow, they proceed to the next floor. But suddenly, they start to see Tartarus glitching like crazy. They try to run up the stairs, but ultimately wind up falling in at the process.

Most of the gameplay from Persona Q2 has been kept, besides of Shadows-Selfs, there will be exclusive enemy copies called "Cybernetic Shadows" which are copies of the characters created by the mother computer system.

There will be doors that would be used as portals to other websites that will led our heroes keep traveling through the internet until they find the portal to go back to the real world. These doors will lead to many labyrinths, battles and quests to find items that may be helpful in the journey.

There will also be some rooms called "Distortion Labyrinths" that will bring temporal abilities to the player's party such as weapons that are commonly seen on YouTube's funny Bloopers, "puke" rainbows through their weapons, among other things.

Koromaru
Add a photo to this gallery

Kotone Shiomi
Add a photo to this gallery 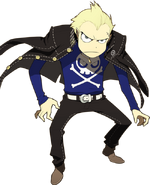 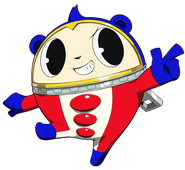 Teddie (Without Suit)
Add a photo to this gallery 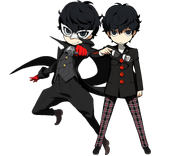 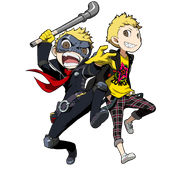 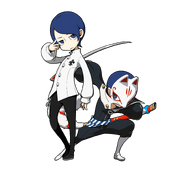 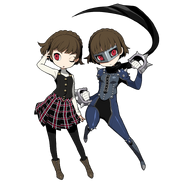 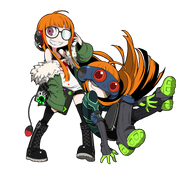 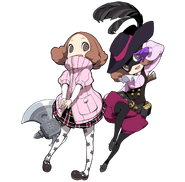 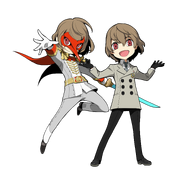 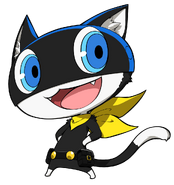 Morgana/Mona
Add a photo to this gallery 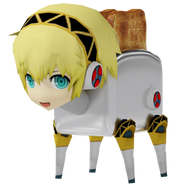 Aigis the Toaster (art by *Gasp* The Enemy!)
Add a photo to this gallery

A Mall-like labyrinth that is based on the shopping sites like eBay or Amazon and the first labyrinth to be selected.

A dark mansion where the darkest side of the cyber world resides. From scammers, and explicit photos, anything goes.

A massive arcade/amusement park where some of the world's most famous online games reside.

A huge casino resort where the most brightest of stars live, big budget projects are in development, and everything that goes with them.

Once all the labyrinths are completed, the final labyrinth will be a huge cybernetic city. Where the Cyber Shadows start to spread their boss' virus. If the city dies, then the party dies too.

During the game, we will find many easter eggs/references to Internet Memes and videos, the following ones can be found:

Retrieved from "https://fantendo.fandom.com/wiki/Persona_Q3:_Cybernetic_Labyrinth?oldid=3286975"
Community content is available under CC-BY-SA unless otherwise noted.