Persona 5 Arena (Persona 5 The Ultimax in Tokyo Tournament Arena in japan) is a game belonged to the Persona 5 games, the game is created by Atlus and Arc System Works.

A few months has passed since The Phantom Thieves had its last mission, suddenly, strange events has ocurred in Tokyo and the P2 Grand Prix Tournament has been announced, motivated by the participation of his friends, Ren Amamiya is decided to go back to Tokyo and take action on this once more.

The Investigation Team and Shadows Operative are on the case too, at the end the 3 groups must join forces to avoid this new danger.

Many of the elements from Persona 4 Arena has been kept, being now a 2.5 dimensional fighting game using the graphics of Guilty Gear XRD & Strive, Dragon Ball FighterZ, Granblue Fantasy Versus and Dungeon Fighters Duel. 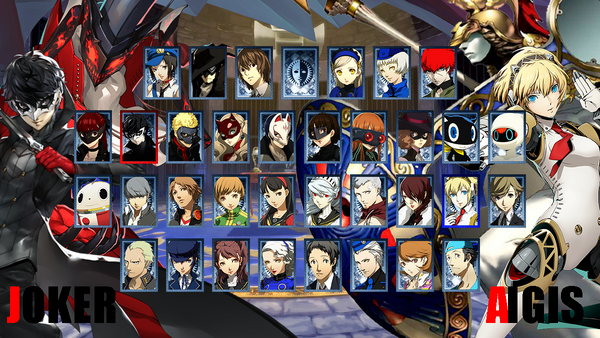 Character Select Screen (No DLC purchased)
Add a photo to this gallery
Retrieved from "https://fantendo.fandom.com/wiki/Persona_5_Arena_(TheProjectXZoneFan1997)?oldid=3340775"
Community content is available under CC-BY-SA unless otherwise noted.