View source
Persephone is the cheery and naive 3-year old daughter of Princess Peach and Bowser, created after one of Bowser's plights in creating the Ultimate Heir by using some DNA from a from a strand of Peach's hair and mixing it with his own.

Persephone is the 3 year old daughter of Princess Peach and Bowser Koopa. She actually came about when Bowser attempted to create a child, using his and Princess Peach's DNA. He expected the child to be as evil as him, but have the abilities to counteract Princess Peach's powers. His experiment failed, as the child was proven to be aligned with the forces of good. As a result, Bowser planned to dispose of the child permanently.

However, a certain plumber came and thwarted the Koopa just in time, and noticed the child bearing a striking resemblance to the princess. After noticing the child, Mario decided to take her to the Mushroom Kingdom, where the princess and another one of Bowser's attempts to make a perfect heir,Jacob Koopa resided. There, the princess was shocked to see what Mario had returned with, yet the princess, felt like there was a connection between her and the Koopaling, and from that day on, she has taken care of Persephone.

Persephone is a relatively short Koopaling, with pink skin, A green shell, a tan muzzle. She and Princess Peach share the same blue eye color, and same blond hair. She also dawns a red sweater with Mario's insignia on it, as is was given to her,on her 3rd birthday. (It's actually his old sweater from when he was younger) Aside from her red sweater, she also has a red headband in her hair and wears red ballet flats, with pink frilly socks.

Persephone is full of energy, much to Toadsworth's dismay. She's pretty much intrigued by everything around her, regardless of if it's dangerous or not, and is often found in the castle garden rolling in mud or getting dirty somehow. She is sometimes bullied, by the Toads within the kingdom, yet she's still an oblivious, but positive ray of sunshine and has even befriended some of the Toads. Occasionally, she likes playing games, and her favorite one is hide and seek, which often involves Mario, Luigi, Toadsworth, most of the castle staff and occasionally Jacob looking for her for about half of the day, when in reality, she hides in the one place that nobody would look (Princess Peach's drawer).

Though she is completely oblivious to them, Persephone has a couple of powers that she obtained as a result of the experiment.

Original artwork of Persephone. She looked more like a male than a female. 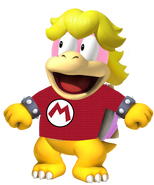 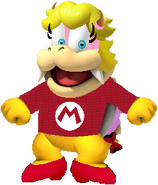