Start a Wiki
“Do a Barrel Roll!”
— Peppy Hare


Peppy Hare was a member of the Star Fox team as well as one of the original three founding members along with James McCloud and Pigma Dengar. He has a daughter Lucy Hare, is the widower of Vivian Hare, as well as the grandfather of an unnamed female hare who will later join Fox McCloud's son on the new Star Fox team.

When the first Star Fox team was sent to Venom because of strange activity led by Andross, Pigma betrayed Star Fox and left James and Peppy open for an attack. Peppy barely escaped alive, but James was listed as KIA (killed in action) due his unknown whereabouts. He had told young Fox about Jame's fate, resulting in Fox enlisting in the Cornerian Flight Academy. He is seen as Fox's mentor and stepped in as a father figure after James disappeared. He often gives Fox advice, most notably his well known favorite phrase "Do a Barrel Roll!". Due to an ongoing illness Peppy eventually retires from being a pilot and serves as a general in the Cornerian army, replacing an elderly General Pepper. 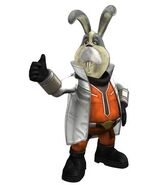 Add a photo to this gallery
Retrieved from "https://fantendo.fandom.com/wiki/Peppy_Hare?oldid=2932880"
Community content is available under CC-BY-SA unless otherwise noted.