Penny Loafer is a celebrity of mixed race descent that lives in Seattle, Washington, aided by her Standing Ripple known as Gorillaz. Granted her powers by the Ocean 11's gang in a desperate bid to gain superpowers of her own, she is now indebted this to mob for life against her will. Becoming a quick celebrity among the Seattle scene, Penny Loafer loves the glamorous life of a celebrity, although not so much the consequences of her own actions and has other people protect her from the mob. The character was created by Helena Harper (t∣b∣c) to give the Standing Ripple users a connecting tissue and creating a character that is specifically a vapid celebrity that isn't directly related to all the battles in the Fantendoverse.

A celebrity with supernatural powers that were granted to her by the Ocean 11 Mob, Penny Loafer is a vapid woman with no concerns other than her fame. She is able to use her Standing Ripple to make people pay attention to her through finger snaps. Her Standing Ripple cycles through various secondary abilities from week to week or even day by day, with some repeats, thus giving Penny the appearance as if she is very talented.

Penny Loafer is a young woman who is a mix of black and Caucasian descent, with some light Vitiligo across her stomach that she usually keeps hidden away. She has purple-brown hair that is cut very sharply, styled to perfection every morning before she goes out in the morning. During this time, she will often eat breakfast and watch the news. She also has a pair of trademark heart glasses, which have become iconic with her image. She wears pretty plain outfits that cost thousands of dollars due to their tag, but are remarkably high quality. She also keeps a brown leather purse around her shoulder at almost all times, which contain things like drinks, her wallet, a razor, lip gloss, condoms, a tv remote, and a variety of pens and a sketchpad. She wears black tennis shoes, which like her clothes, are deceptively plain and cost thousands of dollars. She wears thigh high socks, which unlike the rest of her wardrobe, are actually fairly cheap.

A giant ape with blue fur and light blue skin. Gorillaz features a fairly cartoonish appearance and is rather wide in appearance. The tip of his fur is noticeably lighter, almost cyan. Gorillaz is able to change their size at will and has unique properties relating to how they interact with the environment, able to project themselves on tv screens and contort their image into the second dimension.

Penny Loafer is vapid and cares mostly about fame. As such, her Standing Ripple couldn't be more perfect for her and has brought out some of her worst qualities, such as her attention-seeking behaviors and the need to be heard, no matter what. However, despite her superficiality, there is a part of Penny that is genuine- her want to be an artist. While Penny does not really excel in any particular medium of art, she has extensive knowledge of how to create drawings, music, and film and Gorillaz is able to help her connect to people in the industry to bring her to unstoppable stardom.

Additionally, the relationships she forms with people are not superficial, at least to her. She can remember many faces and names and while she may not have time for people she considers friends, she does her best to keep in contact with those she does consider friends. However, due to her attention seeking ways and fairly immature take on criticism of her, she can come off as either insincere or even petty.

She punctuates almost all her sentences with exclamation points and rarely asks questions. She doesn't really care for criticism, although she is quite well-versed in taking down poorly-constructed criticism. If criticism is lobbed at her, she has been trained to not throw a fit in public but it's clear that it really does bother her. Her bubbly personality can come off as ingenuine but it's actually how she lets people know they have her full attention.

Gorillaz is uniquely animated for Standing Ripple. While it doesn't appear near her in public, it can invade televisions and break out into impromptu music videos for showcases of it's user, often accompanied by a guest vocalist.

Penny Loafer's powers and abilities come mostly from her Standing Ripple, Gorillaz. Gorillaz allows Penny to put attention on her with a snap of a finger, able to both catch the attention of specific people or everyone within a certain radius. It's completely invaluable as a distraction tactic, although is horrible for battle as Penny Loafer cannot really defend herself that well when everyone's suddenly focused on her.

Gorillaz is a rather unique Standing Ripple due to it having a host of cycling secondary abilities from week to week or day to day. It is unreliable and unpredictable, but can sometimes give the impression that Penny has a talent that she doesn't actually have. Additionally, is can invade television screens and turn itself two dimensional, making it fairly hard to hit due it's ability to project itself quickly.

Penny Loafer has no specific powers suitable for battle, but can sketch, sing, capture film and photography, and edit film to a fairly decent degree. 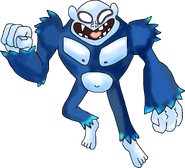 Penny Loafer in her shopping outfit
Add a photo to this gallery
Retrieved from "https://fantendo.fandom.com/wiki/Penny_Loafer?oldid=3077533"
Community content is available under CC-BY-SA unless otherwise noted.