Penny Crygor, most commonly just known as Penny, is a recurring protagonist in the Wario series, specifically the WarioWare series. She is the granddaughter of the famed scientist Dr. Crygor and an employee at WarioWare, Inc., working with Wario and his other employees to develop video games for the citizens of Diamond City.

Penny loves science, and attends Diamond Academy to build upon her skills. However, another big hobby of hers is singing, as shown in WarioWare: Smooth Moves when she performs a song for a cheering audience after winning against her grandfather in the Diamond Academy Invent-Off.

Penny appears in this game as a new Light driver.

Penny appears in Super Mario Spikers as a playable character, appearing as a Defensive-type captain. In the game, it is shown that she has accomplished her dream to be a pop singer, and adopts a similar outfit to the one she has as a singer in WarioWare Gold; a short, pink dress with matching headphones and shoes. Her emblem is a pink heart, and her theme is Electropop.

She tries to destroy the Mind button in Mike's forehead, soon become one of the victims of the Kirthar's Snap Finger. 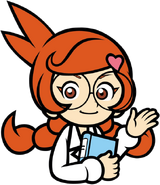 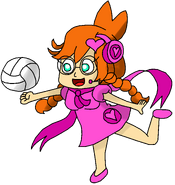 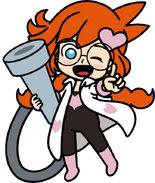