Penguin Mario is a transformation Mario can enter by collecting a Penguin Suit. In this form, Mario wears a penguin costume, with a blue body, white stomach, and a yellow "beak" where the rim of his hat usually is. Mario also wears red overalls over the suit.

Introduced in New Super Mario Bros. Wii alongside Propeller Mario, Penguin Mario has similar abilities to Ice Mario; he can throw Iceballs, which bounce slowly along the ground twice before disappearing. The iceballs can freeze enemies, and Mario can then use a Ground Pound to defeat them or pick them up and throw them, causing them to slide across the ground, defeating any enemies they hit and destroying on contact with a wall. With the Penguin Suit, Mario can also slide down icy slopes, much longer than he could do normally, which defeats enemies and breaks blocks to open new pathways. Penguin Mario can also slide across water, and he has much better traction on icy surfaces.

Penguin Luigi appears in Mario Kart: Infinity Remix as a starter character. He is a middleweight, meaning that for the most part, his stats are balanced. However, he has among the best Mini-Turbo stats in the game in exchange for his Traction being one of the lowest.

On the character select screen, he is placed by Tanooki Mario, Cat Peach, and Gooigi, who are also alternate forms of the main characters. 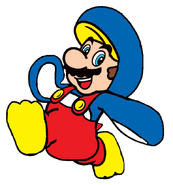 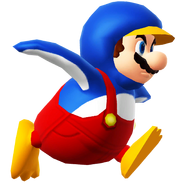 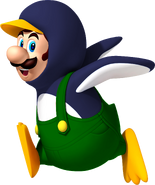 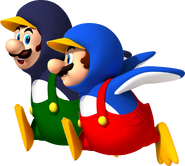 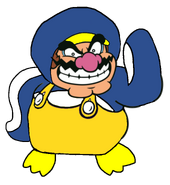 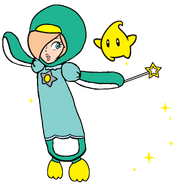 Penguin Rosalina
Add a photo to this gallery
Retrieved from "https://fantendo.fandom.com/wiki/Penguin_Mario?oldid=3134113"
Community content is available under CC-BY-SA unless otherwise noted.