Peachette is the name of Toadette's power-up form after obtaining a Super Crown. It appeared for the first time in New Super Mario Bros. U Deluxe.

In this form, Toadette turns into Peach with gray eyes and a unique crown and dress design stylized after pink, polka dot mushrooms. She has flower effects when using this form.

Peachette is a mysterious power-up that may present some kind of link as to why Peach is the current ruler of the Mushroom Kingdom, perhaps as a "ripe" version of Toadette. The Super Crown has a fungi-like cap on the center base, suggesting it's spores mature the Toadette into a human-like figure capable of aerial maneuvers. However, this still leaves a lot of questions open, such as why Princess Peach is seemingly in this kind of form all the time without the need for a Super Crown. This also seems to ignore the existence of Baby Peach.

Another theory may suggest that Toadette herself invented the power-up to become a mirrored version of Peach, perhaps out of a desire to take the throne herself one day. This doesn't quite explain why the Super Crowns are inside Question Blocks to begin with, and is a fairly controversial theory due to Toadette's perceived innocence.

A third theory speculates that Toadette is actually the original ruler of the Mushroom Kingdom, having split herself due to boredom from her rule. Using her own DNA and ancient techniques, she was able to splice herself and Peach as separate entities and has been happily living as a Toad ever since.

Peachette can double jump, float in the air, and boost out from a fall to land back on a platform. Overall, it can be said this form increases Toadette's abilities in the air but not necessarily anything usable for attacks or keeping herself safe in the form. When utilizing the powers, pink flower effects appear.

When Toadette grabs a Super Crown, she transforms into the mysterious Peachette. She's cute, pretty, and tears apart the Mario lore as we know it!

Peachette appears in Gotcha! as a three star character, with the class of Princess and using the weapon class of Parasol. Her moves are Gust, a powerful gale that blows opponents back, Peach Beam, a pink laser that deals damage, and Bounceback, which allows her to heal allies.

Peachette appears in Mario Party Switchup, as an alternate form of the main host, Toadette. When a Crown Space is landed on, the host will transform, turning the game into a high-risk, high-reward scenario, with ? Blocks scattered across the Board. Peachette will give out 2 Stars at a reduced price.

Peachette is a playable character in Super Smash Bros. Bizarre Infinity, being an echo of Princess Peach. She has alterations to her specials, making her pull out a Toadette instead of a Toad, giving her a glide to her version of Peach Blossom, and replacing her Up Special with a high recovery boost. She is a D-Tier character on the tier list.

Peachette is a playable character in Captain Toad: Lost Adventure. She is only playable in the Bonus Chapter called "Crowned Quest". She behaves just like Peach from Super Mario 3D World,But she can also slow her descend after floating. 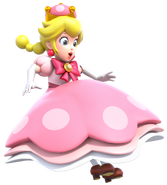 A picture showcasing the transformation.

Retrieved from "https://fantendo.fandom.com/wiki/Peachette?oldid=3315629"
Community content is available under CC-BY-SA unless otherwise noted.