Pauline is Mario's ex-girlfriend, kidnapped by the original Donkey Kong, in the Donkey Kong Arcade game. She wasn't seen for a long time before reappearing in Mario Vs Donkey Kong 2 as a tall, brunette woman.

She returned in Super Mario Odyssey as the beloved mayor of New Donk City. This is her first appearance in the mainline Super Mario game franchise.

Pauline  is depicted as a tall, curvy woman (being slightly taller than Princess Peach). She has long wavy flowing burgundy/reddish hair that reaches her back. She wears a long, formal red gown which reveals her cleavage and the gown stops at her ankles. Pauline also wears a yellow bracelets and yellow earrings. She wears black high heels under her dress. She has large, slanted eyes with long, defined eyelashes and eyebrows that are dark, curvy, and thin out as they extend. She wears a lot of makeup - namely, violet eye shadow, red lipstick and nail polish. Regarding her face and hair, her appearance is a bit similar to that of Captain Syrup from the Wario series.

Pauline appears as a supporting character in Super Mario Quartz. In this game, she has retired from her job as mayor and now owns Morava Colosseum, a large arena in the Olympus Kingdom, and she is a historian in her free time. When Mario arrives here, he must complete five waves of her minigame, Colosseum Siege to find out about the Elemental Quartz from her. She reveals that she had found the Fire Quartz while exploring.

Later in the game, Mario reunites with Pauline in the Volcano Kingdom, after Mario is trapped in a snow cave by Iceburn. Here, Mario and Pauline work together to escape the caves and fight back against Iceburn. She even travels with Mario to Bowser Jr's Kingdom after Peach is kidnapped by him. She is later kidnapped by Bowser while Mario is exploring Bowser Jr's amusement park, and he steals the Fire Quartz that she had kept. When Bowser is defeated, she is freed, thanks Mario, and watches as Cappy and Tiara sacrifice themselves to save the world. For the remainder of the game, she can be found in the Olympus Kingdom, where Mario can participate in Colosseum Siege by speaking to her.

Pauline made a brief appearance in the twelfth chapter, where she showed up at the Mushroom Kingdom to attend Mario and Luigi's surprise birthday party. She then came to find out that Princess Peach's castle was no longer there, since it was hijacked, uprooted, and taken into the skies by Bowser eight chapters prior. Due to these circumstances, the party ended up getting moved over to Professor E. Gadd's laboratory.

Since Cranky was (reluctantly) attending the party, he and Pauline ended up running into one another again for the first time. Despite Cranky claiming that he knew everything there was to know about the story, Pauline's identity is the one that he's puzzled by. He did, however, say that he couldn't shake the feeling that they've met somewhere before. Pauline, on the other hand, did not recognize Cranky at all, presumably because of how much he's aged since their last meeting.

Pauline makes an appearance as a playable Warrior in Super Mario Warriors. In combat she fights with the Light-elemental Microphone weapon, and attacks enemies with soundwaves from her singing, as well as by swinging her microphone around while dancing across the battlefield. The red pantsuit Pauline is seen wearing in Odyssey appears as an unlockable costume.

Pauline appears in New Super Mario Baseball, on the Super Mario Team. Her stats are as follows:

Pauline reprises her role as mayor of New Donk City in the game, first appearing in Chapter 5 although mentioned in Chapter 4. When the group arrives in New Donk City to help Pauline deal with Sonic, she has already jailed him but now a new problem arises in the form of Heavy Gunner. The group plans to get on the top of the New Donk City Hall to confront him and they battle him there. Pauline then holds a concert to celebrate, but is interrupted when Sonic steals the Crown Jewel, aka the blue Chaos Emerald. Pauline then sets off with the group to chase after Sonic.

Pauline is retains her roll as the mayor in this game. unfortunately,she is once again kidnapped by Donkey Kong and Mario needs to rescue her just like the good old days. most of the vocals in this game are sung by her.

Pauline appears as a hidden character.

In the Nintendo Switch version of the game, Pauline appears as a referee at the 2019 New Donk Dream Olympics. In the Nintendo 3DS version, a similar role is taken by Star.

Pauline is absent in the first season of Super Mario Revival, and makes her first appearance in season 2, Super Mario Ultra, particularly in episode 02 (14, if season 1's episode numbers are included).

Pauline is a normal, peace-loving woman at first, but then she realizes that it is her duty to fight alongside Mario and his friends. Her courage somehow allows her to magically develop new powers, which she uses to fight the new evil.

In Super Mario Revival, when Pauline first meets Mario, she is delighted, but is also feeling a bit jealous because of his relationship with Princess Peach. She begins to start falling in love with Mario again. But then, she recalls her break-up with Mario a long time ago, and realizes that they cannot be together since he has found a new woman (Peach). She is heartbroken, but soon gets over it, and the three of them all become good friends.

Pauline is usually seen alone, but she sometimes hangs out with Birdo, or Stanley. She prefers not to be around Mario or Peach but not in a way of hatred or malice, but because she wants to avoid awkward moments and doesn't want to accidentally stir up trouble.

Pauline's attacks are magical abilities that are makeup-related.

Pauline appears as the Mayor of New Tendo City in the television series, The Stories of New Tendo City. In the show, she portrayed as a kind-hearted mayor who really cares for her city. In addition, she often performs Jazz concerts during the city's music festivals, and is also part of a talk show which she shares with Kate Alen, Cynthia, and Diantha. She is a close friend of the Kong Family, specifically Donkey Kong, a close friend of Mario, and is also a major lover of cakes. She prefers homemade cakes that come from the Royal Bakery owned by Peach, and Daisy, and not the pre-packaged cakes found in Tropical Grocery Store, something of which her poor assistant, Isabelle had to learn the hard way! 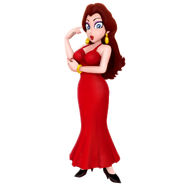 Pauline render made by Nibrocrock.

Pauline in her Sports Outfit

Pauline in her swimsuit from Super Mario Splashers

Pauline in her Tennis Outfit from Mario Tennis Deuce.

Pauline from Donkey Kong (1981)
Add a photo to this gallery

Retrieved from "https://fantendo.fandom.com/wiki/Pauline?oldid=3028011"
Community content is available under CC-BY-SA unless otherwise noted.