A Para Bro. is a type of Hammer Bro. who can fly. They have light-blue helmets and winged light-blue shells. Due to this, they can be considered the Hammer Bros. answer to Koopa Paratroopas. In most games, they fly while chucking hammers. In some games, though, they can attack with other weapons, such as Boomerangs and Fireballs. When one is stomped, it will transform into a type of wingless Bro. depending on what it was throwing. They debuted in Lets-a-go, Mario.

Para Bros. debut in Lets-a-go, Mario. They are always encountered in groups of three, five, or seven and always carry a Super Thwomp above them. When the player draws in close enough, they throw the Thwomp in attempt to squish the player. After this most of the Para Bros. will flee, save for two, three, or four, depending on how many Para Bros. were carrying the Thwomp. The remaining ones will proceed to throw Hammers, Boomerangs, or Rings at the player.

Para Bros. appear once again in New Super Mario Bros. Star. There are two type of Para Bros., the ones that are in groups carrying a Super Thwomp in hopes of squishing the player and the ones that throw hammers simultaneously to hit the player, all of this similar to their attacks from Lets-a-go, Mario. However, the Para Bros. that throw hammers do it similar to Amazing Flyin' Hammer Bros., making Para Bros. like related to them.

Para Bros. reappear in Super Mario World U. They only make appearances in three levels, Blue-Candy Sky-4 (Flying Hammer Brothers!), Blue-Candy Sky-Castle (Ludwig's Electrical Castle), and in Special World-8 (Snaking above the Beautiful Sky). In the game only one of the types of Para Bros. appear in the game. They fly up and down trying to get their hammers to hit the player. When they get hit by or stomped on they will lose their wings and act like normal Hammer Bros. They replace Amazing Flyin' Hammer Bros. 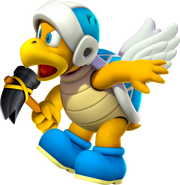 A Para Bro. with a hammer in Super Mario World U