A Para-Beetle, also known as a Parabuzzy, is a type of flying Buzzy Beetle. They can be ridden on top of, but touching one's bottom will get Mario hurt. If they are ridden on they will fly upward. There is also a larger species called Heavy Para-Beetles.

They appear as enemies in Super Mario World: Wii.

They are enemies in this game. A friendly subspecies named Para-Buddle appear in this game too.

They and their Paper Mario series counterpart, the Parabuzzy, make an appearance. Para-Beetles do the same thing as in the previous games. Parabuzzies appear in the two underground levels of World 7, the cloud worlds, in which the first one they jump, and the second they fly.

Para-Beetles appear in the 3D game Super Mario 3D World. They are rare and can be found in groups. They appear in Mushroom Climb, Rocky Cliff, and Tasty Toy Town. Unlike other Mario games the Para-Beetles don't fly upward. They stay in one position and don't move at all. Also jumping on eight won't give Mario a 1-Up Mushroom.

Para-Beetles reappear in Lets-a-go, Mario, along with Heavy Para-beetles - mainly in the Cloudy Area. The game also has green variants of both, along with a blue variety that goes slower. The blue ones will occasionally flip over, though, causing the player to fall off unless a well-timed jump is made. 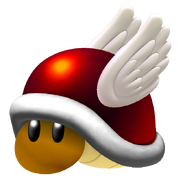 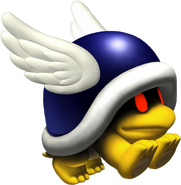