(To suggest ideas for the game, please direct yourself to this page.)

Prologue: Bear With Me Here...

The game begins with a television report about a man (...wolf... robot... thing?) named Doomulus Grime, who is a charming entrepeneur with dashing good looks. A poorly-composed Hood'em reporter named Hood'ia gives the megalomaniacal Doomuli an interview, in which he speaks about his plans of world domination (to an incredibly receptive audience.)

The scene zooms out to reveal Unten staring dumbfounded at the television in the middle of the woods where he lives. Being unfamiliar with technology, Unten engages the (completely inanimate) television in a battle. This results in a battle tutorial that ends in Unten smashing the TV. He then becomes hungry for berries, and the player gains control of Unten in the overworld. After finding the berries, he goes back home to eat them and then falls asleep.

The next morning, Unten recieves a rude awakening courtesy of the sounds of mechanical clanking and buzzing coming from somewhere outside his tent. Leaving his home, he finds that the forest has suddenly become infested with Grimebots and strange lumber machines. A few of them notice him, leading to some confrontational moments. Deeper into the woods, he meets a Grimebot named Grimiore. Unten is immediately apprehensive, but soon realizes that she isn't affiliated with the others. She tells Unten about how she was dumped into the woods years ago for being defective and of the grudge she holds against her creator, Doomulus Grime. She soon joins Unten and the two continue to venture towards the source of the trouble.

Eventually, they come upon a red bear who looks similar to Unten named Forrester. The brutish bear challenges Unten and Grimiore to a battle, which they almost instantaneously lose. Various Grimebots corral around the two's defeated bodies, and the screen blacks out.

Unten wakes up in a leaky brick-and-mortar prison cell, completely alone. The view outside the window reveals that this building is on top of a large cliff overlooking a grassy plain that seems to stretch on for miles.

Unten in the woods 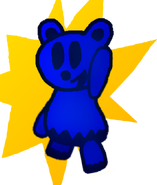 Forrester
Add a photo to this gallery

Retrieved from "https://fantendo.fandom.com/wiki/Paper_Unten?oldid=2062730"
Community content is available under CC-BY-SA unless otherwise noted.