The contents of this article are owned by AgentMuffin (t∣b∣c).

Paper Mario and the Flexi Fragment Forest is actually the sixth Paper Mario game, meant as a return to form for the series. It is an RPG developed by Intelligent Systems and published by Ninkancho for the Display system. Flexi Fragment Forest is meant to be played exclusively on a TV via the Display Box, though the game does include certain "on-the-go functionality" as well.

Flexi Fragment Forest plays like the first two Paper Mario installments. Paper Mario walks, jumps, swings his hammer, and uses his partners' abilities to progress through a variety of quirky locations. In the field, Mario and his party solve puzzles, talk to NPCs, and collect items. This overworld makes up the majority of active gameplay, aside from the integral aspect of battling.

Upon touching an enemy, Mario will enter a battle taking place on a stage. The size of the audience that shows up to a battle will fluctuate depending on the quality of the performance as well as special attacks used by opponents. By stylishly performing attacks and defeating enemies, the player will engage the existing audience, attract new audience members, and ultimately accumulate Star Points, which in bulk cause Mario and his partner to level up and increase a stat of the player's choice.

The theater in which battle sequences take place is an opulent thrust stage. On this stage is a detailed backdrop relevant to the current scene; as well as props based on nearby vegetation, buildings, landmarks, and other setpieces. Both of these aspects can be affected by enemies and random malfunctory effects, such as earthquake-based attacks, and theatrical smoke covering the stage, respectively. The lighting design is also contextual to the battle's location, as is, under special circumstances, videodesign.

The stage features an orchestra pit from which an ensemble of various species play the necessary battle music and sound effects. Many of the visible musicians are recurrent depending on the music.

A new aspect of battling is called Battle Bingo, introduced in Chapter 2. It takes the form of a randomized bingo board in the upper-right of the battle screen. The Battle Bingo board begins blank at the start of a battle, and the player can fill spaces by getting specific results from certain attacks (such as jumping, hammering, and specific partner moves), item usage, and blocking. Getting rows, columns, and diagonals cumulatively increases battle rewards and makes rare item drops more likely; blackouts offer huge rewards. This adds a level of strategization to battling, forcing players to choose between fighting optimally, and failing short-term goals in the hopes of longer-term rewards, especially in boss battles. It was added to provide an alternate way to grind without the process growing stale, if the player chose to do so.

With the return of the chaptered format of story, the player can control other major characters such as Bowser, Princess Peach, and Luigi after each chapter as they progress through parts of their own side stories. These interludes run parallel to the game's main plot, and mainly expand on behind-the-scenes details, provide motivation for the player to advance the main story, and provide miscellaneous worldbuilding.

The Scribblesphere is the graphite-based universe from which the pencil beings appear. Mario can access small parts of this dimension via paper tear-like portals, temporarily leaving his partners behind.

After travelling through a portal, Mario will end up on the Display's touchscreen. Mario can still walk and jump, but the player can draw and erase pencil marks in the two-dimensional area. Pen marks cannot be erased, and white crayon marks cannot be drawn over. Often, these Scribblesphere rooms will contain at least one or two treasure chests as a reward for successfully navigating parts of the area.

Graphite-based beings from another universe are invading the Mushroom World, causing all sorts of mayhem, and leaving stray scribbles and marks all across the globe. Much of the Mushroom Kingdom has been boarded up in defense, including Mario's house, where the Mario Bros. are isolating themselves. Princess Peach invites Mario and Luigi to the castle via letter to discuss the issue, and Parakarry insistently delivers this letter, quoting a variation on the unofficial United States Postal Service creed. However, when the Bros. arrive at the castle, the princess is nowhere to be found. Mario makes his way to Bowser's Castle and confronts Bowser, who admits to kidnapping Peach but insists that she must have escaped, even showing him her empty cage. Mario then notices a trail of pencil lead on the ground near the cage. He follows it through the back door to find everything outside smudged with graphite!

Mario follows his lead to a nearby tropical beach, and across a bridge, he sees the graphite aliens the town was warned about. Against his better judgement, Mario crosses the bridge—and steps on a discarded sheet of paper, which yelps in pain. The paper rises from the ground, angry at the plumber, who quickly apologizes and explains his real intent. The piece of paper introduces himself as Origabi (Gabi for short), an ancient origami master. Gabi agrees to help Mario using his origami abilities, which he demonstrates by folding into a hat and placing himself on Mario's head. He does yield that his memory has began failing him recently, so he does not clearly remember every figure he has learned to fold. For the remainder of the game, Gabi follows Mario around alongside other partners, much like Tippi from Super Paper Mario, rather than taking up residence in his pockets.

When Mario starts his first fight with an enemy, Gabi shows him the basics of action and defense in battle, and how each fighter takes turns in battle. He also points Mario in the direction of the Flexi Forest. The forest is a sacred place said to provide access to the resting places of five artifacts, the Flexi Fragments, that prevented an invasion thousands of years ago.

Mario and Origabi follow a few ancient trailhead signs across the outskirts of the sprawling but scenic forest to find the location of the first Flexi Fragment. To Mario's surprise, the trail leads back to Toad Town, which has been frozen over! Gabi senses that the Flexi Fragment is on the nearby path through Bosky Bluffs, also suddenly iced-over.

Along the way to the Flexi Fragment, Mario has the opportunity to rescue several Toads, though unlike rescuable Toads in other recent Paper Mario titles, they are all named characters that can assist Mario back at the town with services such as cooking and item shop management. He also comes across a learned Spiky Goomba explorer named Goombridger, who teams up with Mario in return for help scaling the frozen cliffs. Goombridger is able to provide tattles on the game's locations, characters, objects, and enemies, and can headbonk to pierce foes with his helmet's spike in battle.

As Mario continues farther up the bluffs, the weather becomes increasingly colder, and Mario and company must cross several frozen and slippery ponds. The huge first boss, Ice-Breaker Blooper, breaks through a layer of black ice on the lakes' surface to battle the party by surprise.

Mario, Gabi, and Goombridger emerge from the fight victorious and continue to a looming fortress in the distance, known to Gabi by the name Blizzard Fort, where the Flexi Fragment appears to be located. Goombridger sees a strange Koopeleon run off as they enter. Parts of the floor in the fort are glazed over with reflective ice, letting Mario see invisible platforms and plan for other dangers ahead of time, though sometimes getting the correct perspective can be puzzling. At the top of Blizzard Fort, Mario is surprised to see Blizzard Midbus. Gabi is sure that Midbus is holding the Flexi Fragment he sensed earlier. However, though the snow and ice melts on Midbus' defeat, he does not drop it. Mario's party has nowhere left to go but back down the fort, where they see the same Koopeleon carrying a roughly conical pink spike on its back. Gabi identifies it as the first Flexi Fragment, and Mario gives chase all the way down the fort. The Koopeleon can be seen when it turns invisible based on its reflection in the floor. Eventually, it runs too quickly for Mario to keep up, until he sees its reflection hanging at the top of a high wall.

The Battle Bingo is introduced here.

A massive reveal will take place in Chapter 5, which will reframe the entire plot of a past game in the Paper Mario series.

Mario can reveal an abandoned mineshaft deep in the hazy core of the Flexi Forest, which Origabi will warn him about. If the player chooses to advance within, Mario will fall into the Pit of 100 Trials, a labyrinthine cave-dungeon of a hundred floors, where the only way forwards is down.

On every floor, Mario and his party must defeat a wave of enemies and solve a puzzle to reveal a Warp Pipe leading further down. However, every tenth floor contains a Recovery Block and a Warp Pipe back to the surface.

Every set of ten floors contains a different selection of enemies, with battles becoming increasingly more difficult the farther Mario travels downwards. Shiny and Flashy enemy variants will begin to appear on lower floors, as well. Goombaron tells Mario that a powerful artifact is hidden on the 100th and final floor, capable of diluting the multiverse to the brink of destruction, but it has not been officially revealed what this artifact is.

Origabi's main partner ability is to turn certain characters and objects, Mario included, into different origami figures by folding into the shape behind the target. As follows is a list of such origami figures.

Origabi preparing to fold Mario into an origami figure. 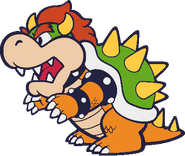 Probably a dopple of Mario. He looks too sketchy to be the real thing. Right?
Add a photo to this gallery

As follows is a list of all music currently confirmed for the game. It is meant to strike a balance between the respective styles of Paper Mario's soundtrack, and those of Paper Mario: The Thousand-Year Door and Super Paper Mario.

ninkancho
Retrieved from "https://fantendo.fandom.com/wiki/Paper_Mario_and_the_Flexi_Fragment_Forest?oldid=2416854"
Community content is available under CC-BY-SA unless otherwise noted.