Paper Mario: The Shards of Time

Paper Mario: The Shards of Time is an upcoming game developed by Purple Paw Studios, and the fifth installment of the Paper Mario series.

It goes back to the roots of the older Paper Mario games, most noticeably The Thousand Year Door; due to the fact that;

Yet it also borrows elements from the original game, most notably being the locations and the return of Star Pieces, as well as the fact that one of your Party Members is used to travel on the water (Sushi from the first game and Gigi from this game).

Finally, it also adds a few new mechanics that will be covered in their proper sections.

Bowser's up to his old tricks again; this time, he had infiltrated a well-hidden temple where the Time Crystal, a legendary artifact responsible for keeping the flow of time going smoothly throughout the universe, was being held. Determined to steal it and use its powers to take over the universe, he was stopped by Ilgada, the Temporius Sage. Not realizing that the Sage was only a spirit (his physical body existed in the Endless Realms), Bowser attacked him, and accidentally destroyed the Time Crystal in the process.

Knowing that the Koopa King would try to grab the shards right then and there, the Sage scattered them throughout the land. The loss of the Crystal forced Ilgada to transform into his Guardian form, where he would be able to exude more power to try and keep the flow of time stable, but at the cost of his rational mind; he could no longer recognize friend or foe.

Enraged at this failure, Bowser left the temple, and headed right for the Mushroom Kingdom; he knew about the legends of the Time Crystal, and knew that its energy could be sensed by one with a pure heart. And Princess Peach had the purest heart in all the kingdom...

At that same time, the Mario Bros. had just received a letter from her, inviting the duo over to her castle for cake (again). Shortly after arriving, Bowser appeared. After knocking poor Luigi into a wall, the Koopa King nabbed the princess and escaped in his Klown Kopter. Mario dropped his injured brother off at the nearest Toad House and set out to rescue the Princess yet again...

There are a total of 9 chapters in the game; a Prologue, one chapter for each of the seven Time Crystal Shards, and a final chapter where Bowser is confronted.

There are also quite a few side quests in the game, many of which give Mario unique rewards, such as the Chill Out badge. Many of the side quests are performed through Toad Town's Help Center, but some of them are discovered in other ways.

These are all the characters that appear in The Shards of Time.

There have been a few changes to the Party Members system since The Thousand Year Door. For example, each Party member now gets their own Flower Points (FP). They also can increase by three ranks instead of the usual two. The last rank is referred to as Omega Rank.

Another new feature to the Party Member system is the addition of Equipment. Each Party Member gets three different pieces of equipment that enhance their abilities.

All of the locations in the game. They're put in the order that they are first visited.

The first party member, Goombit, is recruited here, after Princess Peach is kidnapped.

A small village of Koopas located east of Toad Town.

Located north of Koopa Village, it is a forest shrouded in perpetual twilight. At its heart lies the Midnight Fortress, where the boss Mega Wiggler resides.

The location of the first boss, Mega Wiggler. It is located in the heart of the Midnight Forest.

A nomadic village located in the northeastern area of Dry Dry Desert.

The location of the second boss, Emperor Brutus. It is located in the Dry Dry Desert.

The area that contains the seventh boss.

One of the last locations in the game. Serena T. is the matriarch here.

The game takes many of the enemies from the original Paper Mario and The Thousand Year Door, but also adds new enemies as well, such as Boom Boom, King Bill (and King Bill Blasters), and others.

There are, of course, boss monsters located throughout the world. The first seven main bosses each hold a piece of the shattered Time Crystal.

There are also a few non-optional minibosses scattered throughout the chapters, as well as a few secret bosses as well. Beating the secret bosses is not a requirement to finishing the story, but they often hold valuable items and Badges, as well as Star Points.

Most of the Badges from Paper Mario: The Thousand Year Door appear in The Shards of Time. It is rumored that there will be new badges as well.

Beta Badges from TTYD (such as All or Nothing P and Pity Flower P) also appear.

FGN reviewed this game, with Metroidfan01 of Vortex Gaming Industries giving it 4.5/5 stars, critiquing some missing details that kept the game from receiving a perfect score of 5/5. 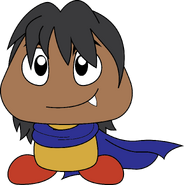 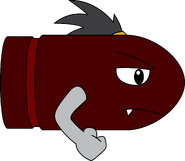