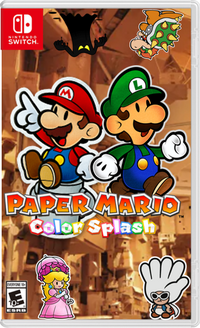 In terms of gameplay, the remake stays almost as true to the original game, however some changes have been made to make the gameplay experience more enjoyable.

Instead of having every single cards set in battle, Mario can now only use up to five cards the player has equipped him with. All five of these cards have their own category of the different type of cards that are matched with the ones used in battle. Meaning that the player can select which type of card attack they want to use dependent on the amount of card points they have.

Now since this game has been ported to the Switch, the card-selection interface is scrapped and replaced with a circle of the five card types Mario can use in battle. The Jump and Hammer catagories are the only ones that have a default card at all times and can be reusable with paint at anytime whatsoever.

Fleeing is a lot easier as instead of just hoping Mario doesn't fall flat on his face when running, the player has to mash the A and B buttons to fill up a bar. Once that bar is full, Mario can then leave the fight without any hesitation. Unfortunatly this doesn't work in Boss Battles.

Levelling up makes a return to the series. Once Mario has collected enough Card Points to fill up a bar in battle, he will level up. Mario has only two things he can increase in battle, HP and Card Slots. HP for the amount of health he has and Card Slots for the amount of slots each catagory of cards he should have. As the game goes on, the bar takes a lot longer to fill up, giving as to how much Mario is fighting throughout the story. The Jump and Hammer cards can also be upgraded in terms of how they're preformed as Mario learns different stylish moves to pull off while preforming these attacks.

During the Nintendo Switch's run, Nintendo ported a lot of their best seller games from the WIi U to the console adding something fresh and new in each port to make it seem different than beforehand. For their next port the team was in a prediciment on what which game to port next. Shigeru Miyamoto and Nintendo Switch producer Yoshiaki Koizumi eventually settled on deciding to port some games which didn't really sell as well but recieved good reception with some fans. It was decided that Paper Mario: Color Splash would be the first one.

Ryota Kawade, the orignal director of the Paper Mario games up to Sticker Star was brought back as a producer and script writer after Kensuke Tanabe was relocated to his Metroid Prime producer duties.

When rewriting the script, Kawade decided to cut back on creating original characters based off of already pre existing Mario chracters, as he felt that he could give some character development to Mario instead of everyone around him feeling as if that he could challenge him and Luigi in some adventure that would seem "simple on the outside, but complex on the inside".

Retrieved from "https://fantendo.fandom.com/wiki/Paper_Mario:_Color_Splash_(Nintendo_Switch)_(Sherman_Target)?oldid=3249483"
Community content is available under CC-BY-SA unless otherwise noted.