Paper Mario makes a quick cameo in the Nintendo Wii game Kolorado's Kwest. He is seen only quickly eating a meal with Princess Peach in the castle.

Paper Mario appears as a hidden fighter in Super Smash Bros. Duel. he can be unlocked by playing 1040 duels, or by using Mario 20 times in duels.

There is an Paper Mushroom powerup in New Super Mario Bros: The Underground that turns the characters into Paper, and they look like characters from the Paper Mario series. Paper Mario himself is also playable.

In Paper Luigi: The Thousand-Year Compass, Luigi will occasionally come across Mario (in paper form) while he is in Rogueport. Talking to his partners will let you hear of what he's been up to.

Mario is helping Proffessor Discuv R. to find the lost city of Papyrusa, along with Goombecky, Booloon and more. Mario meets lots of new characters including, a very special Star Sprite.

Paper Mario 5: The Rise of Shadow

Mario remains the protagonist of the series, returning to Flipside to face a new threat. 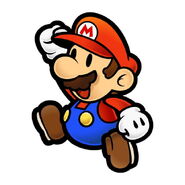 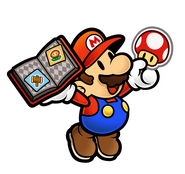 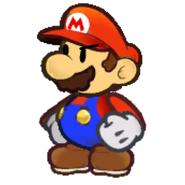 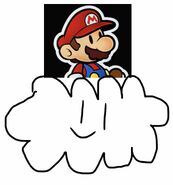 Paper Mario in a Lakitu cloud

Paper Mario In The Origami King