The Panzersoldat (German for "Tank Soldier"), sometimes parsed as Panzer Soldat, is a powerful enemy type featured in Treyarch's Call of Duty Zombies mode, first appearing on the Origins map released for Call of Duty: Black Ops II. The Panzersoldat is a human trapped within a metallic suit designed by Edward Richtofen to assist in excavating Element 115, who was zombified due to excess exposure to the mystical element. Their appearance on the map is signalled by a siren, and the first Panzersoldat to spawn in Origins will always drop a Staff of Fire part once defeated.

The Panzersoldat appears to be a simple zombie trapped within a large suit. The scratched metallic suit has a T-shaped visor on its head, and a large headlamp is present on the top of the helmet. The Panzersoldat has spiked shoulderpads, and rocket thrusters on its back and feet; the rocket thrusters on its back, in addition to its visor, serves as its main weak point. In Origins the Panzersoldat's chest has the Iron Cross symbol printed on it, while in Der Eisendrache and Revelations it instead has a circular bolt-like accessory on its chest and "935" printed around its left thigh. A smokestack sticks up behind the Panzersoldat's head, constantly spewing black smoke as it moves.

In Origins, the Panzersoldat's suit has a flamethrower built into its right hand, while its left hand consists of a two-pronged claw that can be extended a fair distance. In Der Eisendrache and Revelations, the flamethrower is instead built into the Panzersoldat's left hand, with their right hand being encased within a large cannon with two vials of Element 115 sticking out of the top of it. The electric charge cannon in its later appearances is marked with the logo of Group 935.

Despite being a zombie, the Panzersoldat's eyes do not change colour based upon whoever is controlling it. Even though all other zombies that appear in Revelations have red eyes, in all of the Panzersoldat's appearances its eyes glow yellow. 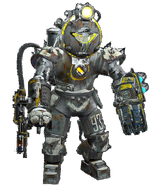 Add a photo to this gallery
Retrieved from "https://fantendo.fandom.com/wiki/Panzersoldat?oldid=2936894"
Community content is available under CC-BY-SA unless otherwise noted.