Start a Wiki
“A perfect battle for a queen...”
— Pandora in a battle in Battle of Bracelets: The Cursed Death
Pandora (also called the Curser of the World, or the Dead Goddess) is one of the new characters that appear in Battle of Bracelets Series. She is a playable character and one of the main enemies in the Story Mode of Battle of Bracelets: Dark Shadows and Battle of Bracelets: The Cursed Death. She's one of the Hades Commanders (the other one is Orpheo) and she wears the Dead Harp Bracelet. She is one of the most Death Bracelets and the most powerful girl in the Hades. Her main weapon is the Death Harp, despite it's a musical instrument, the rivals can have problems with it. Her music is rather powerful and can produce a big psychical damage if Pandora plays a hard melody. Her main ability is Somniferous, this ability lets her put anyone to sleep with touching the victim.

In Battle of Bracelets 5, she gets a canon role, since she fights as a Hades' commander and due to the appearance of an old acquaintance that she met in the past, Prometheus.

The Story of Pandora

Pandora has been always a normal girl, but all her fate was going to be matched to Hades. It was when she had 15 years old, when she started to hear a voice on her mind that asked her to go to Lacal City to find "the best of the treasures". She didn't pay attention to those voices and she even started to think she was crazy, so she decided to start reading to avoid those voices. But she accidentally found a book that was called The Golden Treasure. She started to read it and found something very interesting, the book talked about Lacal City. So she started to investigate.

Curiously, when she arrived to that place, she found nothing, so she walked along the beach of the lake, and she found a man there that invited to a boat trip. That man told her that there was a little island in the lake with a temple. And the boatman took her to that island. When she arrived to the temple, she found a big box in that temple. Her interest made her open the box, and she found a bracelet and a key. With the key, she opened a giant gate at the bottom of the temple. And she wore the bracelet. Her personality changed then, she became an obscure person but now, she knew what the voice was and who her god is, Hades. She opened the way that matches Hades with the world.

Pandora is one of the most perverse characters of the game. Hades made that Pandora's personality has changed her completely. She is an expert of music and she had played always the harp. But since she serves for Hades her music became the best weapon for her. She is cold, intelligent and a person that people can't trust. Pandora can seem a warm person at the beginning but if it is necessary, she will make all that is possible to destroy her rivals. She is happy, calmed and a thoughtful person but her smile always masks her evil side. That is why Hades chose her to be his commander. She also likes gardening arts and she applies it on battles. Her big passion for roses makes a big base of her attacks and abilities.

Pandora is very introverted and obscure. This quality makes that Pandora doesn't have many close people, she inconditionally serves Hades without thinking of the impact that her actions, ordered by Hades, may produce. She is sometimes controlled by the power of Thanatos, Hypnos and Phobos, who order some things to her for good of Hades or his empire. She has a good relationship with Rhadamanthys, even though he sometimes disobey her plans to avoid a damage to Hades. Minos is one of the closest Judges that blindly obeys her because he trust on her objectives. She is more distant with Aeacus that is more used to be under Orpheo's command.

Besides, as it is told in Battle of Bracelets 5, she suddenly becomes inoffensive, her feelings block her easily and reminds the past when she meets again Prometheus, titan who hates her due to the punishment that Pandora set in the past at the time of her opening the Pandora Box.

Pandora, in Battle of Bracelets 4 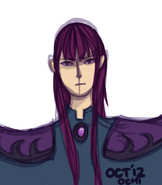 Pandora in Battle of Bracelets 5

Pandora, The Cursed Death appearance from the The Origin of the Legend.
Add a photo to this gallery
Retrieved from "https://fantendo.fandom.com/wiki/Pandora?oldid=1720252"
Community content is available under CC-BY-SA unless otherwise noted.