Pan was born in the dimension called Eden, a peaceful place that was created by Adam, Eve and Lilith. Pan is a direct descendant of Adam and Eve which made him the current prince of Eden at that time, with his parents being the King and Queen of Eden. Pan never really cared about his status as prince, and most of the time hanged out with Nostradamus and Lamia, his best friends. He had some rivalry with Nostra as Pan was always looked upon by people and Nostra always was discriminated. But Pan would always defend his best friend.

One day Pan's father suddenly started to flirt with Lamia and even sexually harassed her. Pan's mother found out about this, but instead of getting mad at her husband she felt that Lamia was to blame as she seduced him. As punishment the Queen would rip out Lamia's uterus making her unable to ever make children. Pan heavily protested against this but it happened nonetheless. Pan became furious and gave Nostradamus permission to kill his parents for their sins. Pan continued to bring calamity in Eden, slowly turning it into the Dark Woods we know now. Pan stole the eyes of a little Eve girl with Lunar powers to increase the chance of getting Solar powers, which he hadn't obtained. But it failed.

Pan and Lamia set up the circus tent in the Dark Woods. Pan began to use his powers to lure the Lilith from the human world to the Dark Woods, as ordered by Plague Master. He lured many into the Dark Woods and set up traps that would severely injure them, often bringing them on the brink of death. After that Lamia could experiment on them and turn them into proper vessels. When Lily and Rai entered the Dark Woods they were kidnapped immediately to the circus tent. While Lamia took care of Rai, Pan did so for Lily. He raped Lily and slowly turned her into the Distressed Doll.

After Hein entered the Dark Woods, Pan felt another chance to strike him and severely injure him. He walked up to Hein and smashed him unconscious and left him there to be eaten by the creatures of the Dark Woods. Unfortunately for Pan that didn't happen and Hein was instead saved by Slime. During the events of Dark Woods, Pan acted like a nice person towards Hein and would guide him on his quest to find his sister's amulet. He managed to convince Hein that all the creatures he had locked up in the circus tent were of evil nature, until Hein encountered Rai and Lily.

After Hein freed Lily from her blindfold he went to the main area of the circus tent where Pan was awaiting him. Hein said he had discovered that Pan was behind of all this and that he would pay for what he did to his family. Pan smiled and was glad that Hein found out as he was sick of pretending. They fought in the center of the circus tent, but during that battle Pan's complete Solar powers awakened. Pan said they would battle elsewhere and fled. Hein went through the pocket dimension leading to Pan and engaged battle with him.

Pan had turned into a gigantic version of himself and his eyes were burning with the passion of fire. But in the end Hein managed to get the upper hand and killed Pan, decapitating him. Pan faded from existence and the pocket dimension disappeared. The only thing that remained of him was his hat that fell off during battle.

Despite Pan already being deceased by the time of Hollow Remnants he plays a major role in the plot of the story. During his years collecting the Lilith from the other dimension, he released several hollow puppets that were given the name Slender Man in the Earthly dimension. These puppets had to search and bring back Lilith so he and Lamia could alter them.

The last Slender Man created was without a doubt also the best one. He was eventually dubbed SlenderPan and got an outfit that resembled that of Pan. He is the most conscious of all the Slender Men and carried the will of Pan. He was killed at the end of the first volume by Ligeia and Hein.

Pan reappeared again in an erased memory of Ligeia. It was revealed that Pan killed her mother, Pythia, in order to kidnap Ligeia to the Dark Woods.

After being killed Pan was locked up in 'The Gate' which is by means an Underworld for the Dark Woods, yet much more gruesome as the souls are manifested as horrible monstrous versions of themselves, including Pan.

He was released among many others at the start of the game and quickly made his way to the circus tent to visit his old friend Nostradamus, although it was a hostile visit rather than a friendly one. Pan wanted to attack Nostradamus for letting Lamia die, but he was stopped by Hein. They battled and Pan fleed when the others also entered the tent.

He roamed through the Dark Woods until he was approached by Hein and Ashley who had made him a potion which could turn him back to a regular and sane version of himself, more resembling how he was when alive. The potion backfired and turned Pan into an even more gruesome creature. Hein and Ashley battled him, and when he was weakened enough Nostradamus walked in to end Pan's life for good. His spirit ascended and was absorbed by Isis. It is likely that his spirit also was released when Isis reverted back and that he finally had found peace.

Back in the day when Pan was still a child he was a cheerful boy who always wanted to play with his friends. He treasured his friends more than anything and always thought up fun games to play even though the other two would often find his games too childish. Pan always had a secret crush on Lamia but never managed to tell these feelings for her. After an encounter with his rival and best friend Nostradamus he made up his mind that he wasn't in love with her. Pan had a big rivalry with Nostradamus mainly because Nostra was much stronger that him, but that Pan was always looked upon by others. But they would always defend each other in thought situations.

After the tragedy in Eden, Pan's personality pretty much stayed the same but was way more straight forwards with it and displayed that most of the time. He still acts like a little child, giggling about the silliest things and laughs very hard about a good joke. He can't take anyone seriously and sees his current life as a fun little game. Pan can get very furious very fast when it concerns his friends.

Pan wasn't the strongest person around when he was young, despite having the ability to control the Solar Energy, but never was able to obtain it. After stealing the Eve eyes of a little girl some of his Solar powers awakened but not completely. He only could use pyrokinesis, teleportion and could distort space a little, but further than that he couldn't go. However when his true powers awakened Pan had the strongest form of energy known in the Dark Woods, until Plague Master acquired the Nova powers. Pan is able to shoot gigantic fireballs, flares make pillars of fire and similar pyrokinesis abilities. He could change his own shape and even acquired the abilities to strike lightning, heal himself and create explosions on random locations. 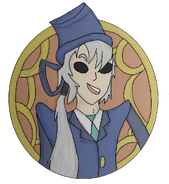 Pan in Dark Woods: Survival
Add a photo to this gallery

Retrieved from "https://fantendo.fandom.com/wiki/Pan?oldid=2362480"
Community content is available under CC-BY-SA unless otherwise noted.