Lady Palutena is a main character in the Kid Icarus series and is the Goddess of Light, rightful ruler of Angel Land, and patron deity of Pit. She is kindhearted and benevolent, as opposed to the cruel and malevolent Medusa. Despite being a divine goddess, Palutena also seems to be somewhat of a damsel-in-distress, as she was kidnapped and held captive by Medusa, and needed Pit to rescue her. She has long green hair and is equiped with a staff.

She also appears as a supporting character in the Fantendoverse in both the pre-Shattered and post-Shattered continuities. While not originating from the Fantendoverse from either continuity, she still makes frequent visits mainly because of her son Strafe and her sister White Goddess. More information about her Fantendoverse appearances are available on this page.

Palutena is a "pure-hearted and kind" goddess who puts her people before her own welfare. Depicted as kind and wise, she is shown to care much about the human race and her personal army, and will go to great lengths keep them safe from harm.

Despite her mature appearance, she has been shown to possess a playful and mischievous side. Palutena often teases Pit, and even purposely places him in dangerous situations in order to complete his missions. She also has a habit of saying common phrases incorrectly and using complex vocabulary that confuses Pit. Despite this, she gets along swimmingly with the angel and banters with him throughout their adventure.

She is shown to be intelligent and knowledgeable, as she helps Pit identify weak points for his foes, and gives him hints for overcoming obstacles. In fact, her information is so useful to Pit that Hades sometimes calls her "Professor Palutena" or "Know-It-All Palutena" during the events of Kid Icarus: Uprising.

Like in Brawl, she appears as an unplayable character. Despite her role in The King of Stories, she also appears as a Trophy, Final Smash and many of Pit's attacks in the game are named after her.

Super Mario Bros. and Sonic The Hedgehog in Time

She appears to be a supporting character she helps you defeat Hades. She appears as a boss for Mario, Pit and Bowser. She helps you find the villian in Chapter 20 -31. She is a minor character.

In this game, she is kidnapped and taken to a place know as Dark Realm, so her Guards say to Pit to save her.

Palutena appears as a playable character in this game.

Palutena is one of the default characters in the game. 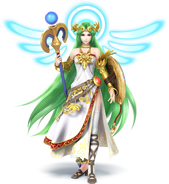 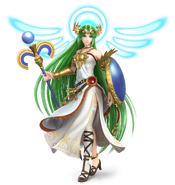 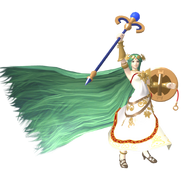 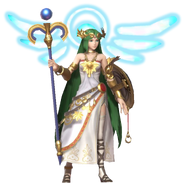 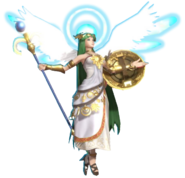 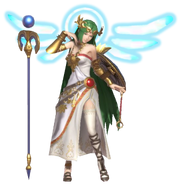 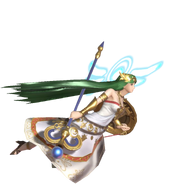 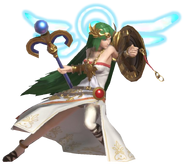 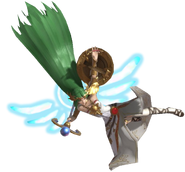 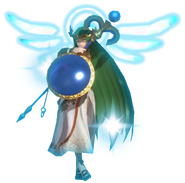 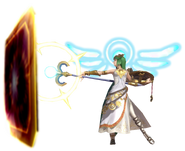 Add a photo to this gallery
Retrieved from "https://fantendo.fandom.com/wiki/Palutena?oldid=3344341"
Community content is available under CC-BY-SA unless otherwise noted.