Fantendo - Game Ideas & More
Register
Don't have an account?
Sign In
Advertisement
in: Sysop Approved, Free to use Characters, Characters,
and 18 more

PalmMan (also known as Palm Man, Palmman) is a hero with a cybernetic and explosive arsenal. PalmMan is the main protagonist of several games and series.

If, through his iteration, his story and power changed, sometimes drastically, it frequently appears that he is a robot created alongside two other cyborgs: DragonMan, his closest ally, and MineMan who will become his main enemy.

He first appeared in the PalmMan game and was originally created by COKEMAN11 (t∣b∣c).

PalmMan has a green helmet with crystallized palm fronds on it and has pale skin with green eyes. He wears a green scarf and has a tan cloth chest plate. His arms are green and black striped. His right hand is a cannon while his left arm is normal as you can get with a robot. He has "stilt" like legs that allow him to run faster as well as being able to stretch them to reach higher or cover more ground.

In Victory, his look was vastly changed. He wears a chest plate and his left arm has been replaced with a more robotic one. His helmet is also removed to reveal his green hair.

PalmMan is mostly optimistic, although he has a lower limit to which he has patience for. He isn't afraid to call anyone's bad actions and doings out, often sometimes being a straight man to even more grounded characters like Strafe. PalmMan can also be very anxious, sometimes being needed to be calmed down by Dragonman. He is also laser-focused, not allowing himself to become distracted. He doesn't like to brag, or people who judge others. However, rather hypocritically, PalmMan somewhat brags secretly about his strengths, as he enters fighting tournaments to show off his power. PalmMan can also be rather goofy from time to time, such as insisting on the nickname "SneakMan" whenever he is asked to do something that requires stealth.

One day, PalmMan met DragonMan in the city of 4.15. He reveals that both of them and MineMan were all created by the same scientist. PalmMan's purpose was to protect the environment and DragonMan's purpose was to help the military, as for the MineMan, he was created to protect the ground and help humans to find precious mine. Things go wrong for MineMan who turned evil, killed their creator and created his own army of robots determined to conquer 4.15. Then, DragonMan gives PlamMan his power as he finds himself too weak to defeat MineMan. Right after, he gets captured by MineMan who wants to make him one of his robots.

To save DragonMan and the city, PalmMan defeats one by one MineMan's robots until one of them creates an explosion so powerful he launched PalmMan in the dark space. There, PalmMan meets Pegasus a force that, after testing him, send PalmMan back to Earth ready to fight MineMan. After defeating MineMan, PalmMan went live in a Forest where he met a new ally Young Ike. DragonMan became Vice-President of 4.15 while training with PalmMan to become more powerful herself.

Unfortunately, MineMan was still well-alive and determined to take DragonMan. After multiple failed attempt, his own army turned their back against him, in particular DarkMan who becomes a real threat not only for MineMan but PalmMan too and the two nemesis had to ally to defeat him. Even after fighting together, MineMan is still as evil as ever, PalmMan takes the decision to stop him once for all. He collected the five Colored Hourglasses and uses them to trap MineMan into the Hourglasses Dimension for eternity.

During the Fracture incident, PalmMan appears to save Unten, Reese and Abba from demons before the four of them got all caged in Hell. They are finally freed by Strafe and Ella Metals. After a fight against the White Goddess, the group leaves Hell and heads to PalmMan's house where DragonMan can be found with other heroes from the Fantendoverse.

The robotic bodies of PalmMan, DragonMan, and MineMan were all created on Earth as part of a government program called the T.R.I.A.D sometime during the Cold War. Intended to be used as super soldiers in the case of a Soviet Union attack, each had its own specialties. PalmMan was intended for land combat and could lob napalm and camouflage himself. DragonMan had built-in flamethrowers and could stand insane wind speeds to take down planes. MineMan could float in water and drop mines in the water. MineMan's programming went rogue thanks to The Darkness, which infected his mainframe and told him to head to space with PalmMan and DragonMan.

On a planet called 4.5, MineMan became the ruler of the planet and constructed more robots using the resources. Things went MineMan's way for a long time before DragonMan became rogue himself (for some currently unknown reason that will probably be revealed in 3.14 Worlds) and MineMan sent him to be dismantled, fearing that he may attack. Shortly after DragonMan was sent off, PalmMan also became rogue and had realized that he was in love with DragonMan.

After going on a perilous journey to rescue DragonMan, MineMan called upon Pegasus, a god, to keep PalmMan away from rescuing DragonMan. PalmMan defeated Pegasus and was able to stop MineMan, who told him of their origins.

After defeating MineMan, PalmMan and DragonMan headed back to Earth to find their origin spot, out of uncertainty of what MineMan told them and to see if they could become peaceful robots instead of war machines. During the course there, PalmMan and DragonMan were accidentally separated. PalmMan was taken in by a young witch named Edith who kept him locked in her basement until Unten and Strafe showed up.

PalmMan, or Nikau, is a young human soldier with a powerful cybernetic equipment, he is the highest operative of the TRIAD. After a worrying rise in Doomuli activity, PalmMan was asked to infiltrate and destroy the Doomuli base on a jungle planet, Silmhatik. Once there, he found the native people of the planet being enslaved by the Doomuli, to help them he joins their resistance, until they all regaining all their lost temples which housed powerful artifacts helping PalmMan in his mission.

PalmMan succeeds, weaking the Doomuli's defenses, disabling their invasion fleet but also defeating their local commander, Mine Man (or Doomulus Mine). PalmMan came back to the TRIAD not only victorious but with new knowledge about the Doomuli plans.

PalmMan, designated as TRIAD-003, is a mining robot fuelled by elemental Plant energy. He is working on Sector 4.5 of a remote mining asteroid named the Cyber Moon where his duty is to reforest abandoned mining zones and to provide oxygen in underground tunnels by growing moss. He spends most of his time with his two best friends, DragonMan and MineMan, and her adoptive sister FernWoman. PalmMan and his friends are making the best of life despite their lowly positions and sneaking out secret treasures from the mines. As time passes, PalmMan and DragonMan become closer and start to grow feelings for each other, while MineMan becomes more and more distant from the two.

PalmMan comes back from work one day to find both of his friends missing, and their home completely ransacked. He quickly learns that MineMan wants to take control over the mining colony and tied-up DragonMan who tried to stop him. Now, PalmMan must journey to rescue his friends, venture into the depths of the Cyber Moon, and uncover his secret past as a war machine.

PalmMan was the leader of his own Faction made of PalmMan, Dragonman, and Litle P. The only Faction they defeated in the surprise attack was RedYoshi's Faction. But, PalmMan's Faction took it as a victory and went back to their base.

Playable character as heavyweight in 3 installments

Appeared in all 5 installments

Playable from the Blue Team

DragonMan appears as PalmMan's main ally in his adventure but also the one that needs to be rescued from Mineman.

In the original series, PalmMan is, for DragonMan, the only hope to save the city of 4.15 against MineMan. DragonMan feeling weaker, gave his power to PalmMan in order to help him to fight against the evil robots. Several times, DragonMan is kidnapped by MineMan and PalmMan never hesitated to go and save him. In the later games, PalmMan trains DragonMan to become a better soldier. It was told by the series creator that PalmMan and DragonMan would eventually become rivals, but until now it hasn't happened.

In the New Fantendoverse, PalMan and DragonMan were two robots navigating spaces looking for meaning. Suddenly, when MineMan went rogue, PalmMan and DragonMan had no choice to stop him. The dangerous mission helped PalmMan to realize how much he cared for DragonMan. PalmMan finally admitted that he loved DragonMan. After defeating MineMan, they both learned their origin, they were created as war machines on Earth, and went back together on Earth to investigate more.

Mineman is the main antagonist from the PalmMan games making him the biggest foe. Despite their numerous fight, their relationship has never really developed as MineMan's main focus is to capture DragonMan, PalmMan being more a nuisance on his way. Both of them, join their force together one time to defeat DarkMan who launched a rebellion inside MineMan's army threatening him and the world but as soon as DarkMan was defeated MineMan attacked PalmMan.

In New Fantendoverse and Cyber Dawn, MineMan started as an ally before turning evil. In the original series, he was the main antagonist from the begining.

FernWoman is the fourth robot created after PalmMan, DragonMan and MineMan. Her and PalmMan started to work together and while they're technically not related, they see each other as siblings. She is somewhat snarky and loves to tease PalmMan about his crush on DragonMan. FernWoman is also a strong ally for PalmMan helping him in his adventures.

When PalmMan exiled himself on a tropical forest, he met Young Ike, a little knight. Young Ike attacked him before understanding that they were both on the same side and since then they become ally. Both living in the forest, PalmMan trains Young Ike to become a better knight. 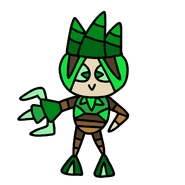 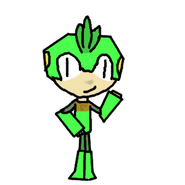 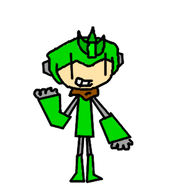 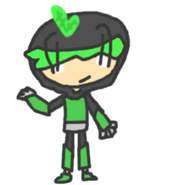 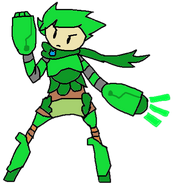 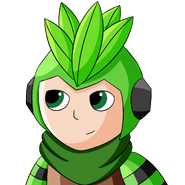