Palefish is a Dual-type Water/Steel Pokémon introduced in Pokémon Heaven and Hell Version. It is the final form of Arrowfish.

The nose evolved from arrow to a sword for a better speed attack. Palefish is notorious for its agility and can defeat a pokémon just one hit with its tip of the nose and is since then banned from competitive play.

Palefish is based on the Swordfish with the rapier as its nose.

Palefish is a combination of Pâle (french for blade) and fish. 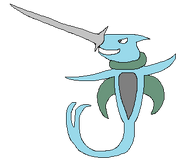 Palefish's artwork from Pokémn Heaven and Hell
Add a photo to this gallery
Retrieved from "https://fantendo.fandom.com/wiki/Palefish?oldid=2710297"
Community content is available under CC-BY-SA unless otherwise noted.