Start a Wiki
Paint Roller is a recurring Kirby character. It is mostly known as a mid boss or a boss. However, he is a main protagonist in some other games.

In Kirby Super Star 2, Paint Roller as a couple of appearances. In Spring Breeze, he is the boss of Float Islands. In "To The Stars", he is the boss of the Rainbow Planet. He is also featured in the minigame "Paint Rolling", the players must shoot the targets that he paints. In the game, he shoots paintballs and paints various objects to throw Kirby off. The paintballs, when swallowed, gives Kirby Paint Kirby.

Paint Roller is only a mere mid boss in the game. He gives up Paint when swallowed. 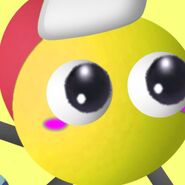 Add a photo to this gallery
Retrieved from "https://fantendo.fandom.com/wiki/Paint_Roller?oldid=3203906"
Community content is available under CC-BY-SA unless otherwise noted.