Not to be confused with the Pikachu of the same name.

PIKA is a supporting antagonist, and one of the two final bosses, of Neverworld The First. He was created after The Neverworlder fused Mario, Pikachu and Bowser together.

Physically, PIKA appears to be virtually indistinguishable from Mario, with the exception of his face. His face, which is a yellow colour, has two, pupil-less, blue eyes, and rosy red cheeks. This makes his face similar in appearance to Pikachu's. As a result of the energy confucted by fusing the three characters together, PIKA also sports grey hair.

Mario's, Bowser's and Pikachu's personalities lay dormant inside of PIKA, and can come out at any time, giving the impression that he has MPD. However should one not be in control, PIKA is a psychotic being who is often mute - the only exception being his cruel, distorted laugh.

PIKA appears as a major antagonist in Neverworld The First. In the game, he is created after Mario's and Pikachu's armies attempt to fight Bowser. Prior to the Neverworlder appearing, Daisy is killed, which is suspected of being the reason for his summoning. As he appears, his energy fuses the three commanders together. Now sharing one mind, they command their now-single army to attack the Neverworlder, and quickly succeed, killing him for good.

Unlike his major appearance in the prequel, PIKA is a minor supporting character in Neverworld The Second. He appears in the opening, duelling the Pied Piper, as he was in the end of the prior game.

PIKA appears later, having been kidnapped by Sunnyscythe. He plays a more major part in this battle, as his powers, drained by Sunnyscythe, are used against Janie Twice, killing her.

In the 2014 reboot to the series, Neverworld Rift, PIKA has been confirmed to appear as a major antagonist. Not much else is known at this time. Its appearance is slightly different in this new installment, with the "M" on its hat being red, instead of yellow, as in the previous games. In addition, it no longer wears gloves, and instead has spiked claws protruding from the ends of its fingers. Like the Neverworlder, PIKA is now regarded as genderless; the reason being unknown.

PIKA is created by the Neverworlder in the game's first chapter. Throughout the next few chapters, it sends the world into panic, and is believed to be the one behind the creation of the Neverworld by many. After learning about Daisy and her clone, Janie Twice, PIKA kills the Sarasaland princess, and absorbs her soul. Throughout most of the game, PIKA's sanity continues to decrease, and it suffers from a sort of dissociative identity disorder, as Daisy's spirit attempts to take control of the monster's body.

At the end of the game, Daisy successfully takes temporary control of PIKA's body, and uses its powers to fix much of the damage it and the Neverworlder caused. Due to this usage of power, PIKA's body disintegrates, and now fully killing Bowser, Pikachu, Mario and Daisy. 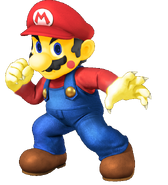 Fantendo Smash Bros. Shattered
Add a photo to this gallery
Retrieved from "https://fantendo.fandom.com/wiki/PIKA?oldid=3120988"
Community content is available under CC-BY-SA unless otherwise noted.