A P-Switch is a blue switch found in Mario games. It first appeared in Super Mario Bros. 3. When Mario steps on it, it will trigger something to happen. It may turn all Brick Blocks in Coins or vice-versa. It can also make groups of Blue Coins appear. There is also a time limit for it. There are two other switches as well like the ! Switch and the ? Switch. The ! Switch can create Red Blocks, it is also known as the Red Switch or Magenta Switch. The ? Switch will make events happen like blocks breaking, creating new floors or creating new areas.

The P Switch appears in Super Mario Moose as an item. In this game it creates blue coins for a limited amount of time that the player can collect. It mainly only appears in bonus sections of levels.

In Mario Kart, P-Switches turn all Coins on the track into Brick Blocks for a few seconds, which slow down players that collide with them. In HammerBro101's Mario Kart games, when activated, the P-Switch appears above all racers ahead of the user. On the third strike, it makes those racer spin out and lose their speed in a way similar to that caused by the POW Block, except it turns their items into Brick Blocks instead of making them lose their items, rendering them unable to use them for 10 seconds. Unlike the POW Block, players cannot press the tricks button on the third strike to receive a tamer version of the effect, though they will not be affected by it if the third strike goes off while they're in the air. 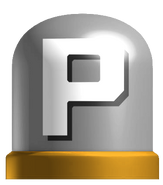 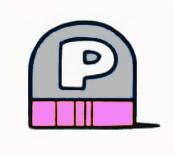 Artwork of a Gray P-Switch
Add a photo to this gallery
Retrieved from "https://fantendo.fandom.com/wiki/P-Switch?oldid=3320141"
Community content is available under CC-BY-SA unless otherwise noted.